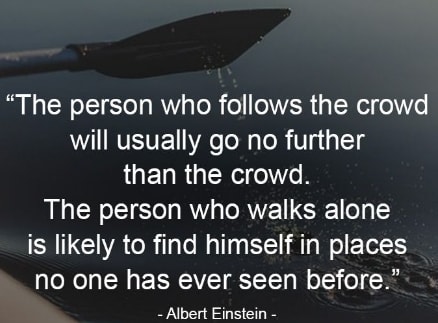 “The person who follows the crowd will usually go no further than the crowd. The person who walks alone is likely to find himself in places no one has ever seen before.” ~ Albert Einstein

For many of us, being different or unique has a negative connotation. We tend to look at people differently especially if their actions or behavior does not conform to what we consider as normal or common.

You see them everyday. Heavily tattooed guys, girls sporting Mohawks, or men wearing those really big Afros and though some people don’t pay much attention, others who are more conservative would probably look at them differently and with a bit of judgment.

I’m not trying to discriminate someone here. In fact, I admire these types of people because they have the balls to express themselves and they couldn’t care less what others will say. Something I don’t have the courage to do because I was weary of what others will say about me.

One of the lessons I learned from writing about personal development is that our happiness comes from us and not from other people and that being weird or different is not such a bad thing after all. We are in charge of our lives and it is entirely up to us if we will curve our own path or if we will stay safe by doing what others does.

Here are 4 reasons why we should stop following the crowd:

1. It will hold you back from success: People who have achieved massive success aren’t like other people and so does millionaires. They have become who they are today because they dared to be different. Otherwise, everyone will be a millionaire.

One of the best examples we can look at is Warren Buffet who is considered one of the world’s richest man. In his book, Warren Buffet’s Management Secrets, it was revealed that one of his trademark is to go against the wave and walk alone instead of doing what others does. He dared to challenge the norm by choosing to be different. He invested when no one else would and pull out when everyone’s investing. He wouldn’t be as successful today had he decided to go with the crowd.

2. It will kill your creativity: Following the crowd will make you settle for what you think is good enough. As long as everybody does it, you should be alright. You don’t have to stress yourself out by thinking of ways you can improve because you’ve already accepted that you are normal because you are doing whatever the majority is doing.

I remember a friend who advised me before not to pay the remaining balance in my credit card because according to him, no one gets jailed for doing such and that everybody does it anyway. I have to admit, I almost gave in to the temptation of totally ignoring my debt. Thankfully though, I was still thinking rationally at that time and I still knew the difference between right and wrong.

3. It will limit your capabilities: one of the worse things that following the crowd can do is to limit, if not stop, your potential for growth. I’ve always stressed the importance of having a dream or ambition because these things will set your path for success but if you continue to pattern your life according to what you see as normal from other people, the possibility of fulfilling these goals will be very small if not at all.

My brother-in-law grew up in the province and as he was growing up, he watched his father grow their farm into a big and thriving business. He could have settled for that kind of life having been surrounded by people whose source of livelihood is farming but he had other plans so he worked hard and is now with his family living in Italy. I’m not trying to discriminate farmers or farming for that matter. I’m just trying to show everyone that not following the crowd can be good for you.

4. We all have greatness within us: One of the people I follow on the social media through his podcast is Chris LoCurto. In one of the episodes, he mentioned a very powerful quote that I will never forget.

“You are more than enough.”

It struck me because people have the tendency to come up with excuses before we take action. We seem to be waiting for something like a sign or the “perfect” time when everything we need to begin is already within us. We’re all born equipped with greatness and we just need to find it but you will never discover this greatness if you continue following the crowd and blending with the majority. By doing so, you are already prohibiting yourself from finding the greatness that was planted in you because you have decided to be average and be like everybody else.

Following the crowd can be a lot of things. It can be your excuse for laziness, it can be your way of pleasing other people, or it can be your idea of being normal. Whatever the reason is, it’s important for you to realize that choosing your own path and walking on it alone is not a bad thing. Dare to be different and live life according to what makes you happy. It is your life after all and you owe it to yourself to make everything count.

Are you still following the crowd? Have you tried spreading your wings and setting your own path apart from the others?.

Don’t Give Up, This Storm Shall Pass & You Will Come Out Stronger Than Before
Lagos CAN Chairman Apostle Alexander Bamgbola: I Was A Wizard, Witch..How I Joined The Occult World