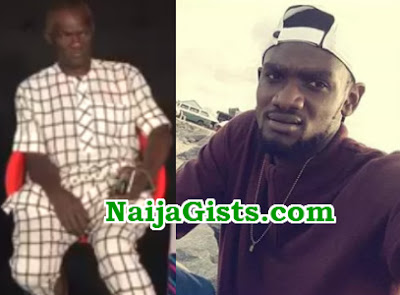 ‘We were at home in Ibadan, when a family friend who does not normally call came to the house with his wife. They said Chime was in an accident and we should pack our bags and come with them to Lagos. It was very strange to me and I wondered what was going on,’ Mr. Amaechi said.

It was early on Sunday morning and they were getting ready to go to church. About that time, some friends had seen reports of it online and had called his sister. ‘I noticed someone else who I don’t talk to often called and when I picked all he was saying was ‘Oh my God, oh my God’.’

It didn’t take much longer to realize that Chime was dead. The family made their way to the morgue and Lagos State University Teaching Hospital in Ikeja.

His father went in there and looked at the body. ‘I went inside. He’s my son. I went to look at him. He was still bleeding fresh blood from his nose and foaming at the mouth. It looked as if it just happened.’

No parent should have to recall looking at their child’s corpse. As Chime’s father spoke, he masked his pain bravely; a trait that his daughter, Sopulu, must have also picked up. Neither of them shed into tears as they spoke to us, their voices only trailing off for a few seconds at intervals. The rest of the family sobbed quietly in the corner, trying to be strong in public but failing at it.

However, the family is convinced that this was no ordinary death, or an overdose as reported in the media. Sopulu in particular is insistent that they were murdered.

‘First, nobody is talking about the fact that they went to eat somewhere before heading home. Someone put the video on his Snapchat and was zooming in and out of his food. That was unlike Chime. He was usually not one to show the surroundings of where he was at any given time. But on this occasion someone was recording him. Few minutes later the video was deleted, it wasn’t left there for the normal 24 hours.’

Could he have overdosed on drugs, like initial reports had it? They disagreed vehemently. ‘My son was not a drug user,’ his father said. ‘He doesn’t even drink and if he did, it was just a little. He was the one always telling his friends not to drink or smoke. For anyone to claim that he overdosed on drugs is malicious.’

It had been reported in the media, based on a Punch coverage, that police found ‘hard drugs’ in the BMW where Olu and Chime had died. ‘Then they should tell us what hard drugs they found. The drugs would have a name. Besides, can two persons overdose at the same time on the same thing and die exactly the same way? It doesn’t add up.’

Again, one would not expect that grieving parents would agree that it was a possibility that their child used drugs. After all, he was young and considerably successful. As we’ve seen in successful people all across the world, drugs didn’t have to be big deal that they couldn’t get if they wanted. Like Lamar Odom said about his wife, Khloe Kardashian, not knowing of his drug addiction when they were married, ‘I had money in my pocket; I could score when I wanted.’ Perhaps an autopsy would give them closure – Chime’s death could have been as a result of an overdose.

His father and sister would have none of that. Sopulu is of the opinion that whoever killed her brother was responsible for the dirt being thrown on his name posthumously. ‘They should show us the footage from their house. Someone who saw it said when Olu and Chime parked, a hooded figure came to drop something in their car. That person is unknown.’

Her father thinks so too. ‘Already I’m skeptical of the autopsy. These substances could have been introduced to them later, given this strange individual that was said to drop something in the car. If the autopsy comes back and they say there was drugs in his system, I would be shocked but I won’t be surprised. I’m very skeptical.’

But we were not satisfied. The report the family gave of Chime was of a nice, easygoing, gentle soul. Why would anyone then want to murder him? Could it be blow-back from the unresolved Tagbo death few days earlier which Davido had been accused of being complicit in? Were Olu and Tagbo killed to prevent them from talking about Tagbo’s death?

Chime’s family disagrees. They don’t think the singer was involved at all. They think it’s one of the unfair media coverage they’ve received. His father told us that the friends had been distancing themselves from music to focus on ‘real business’.

‘If you look well, you’ll see that Olu was referred to as ‘former DJ to Davido.’ Olu’s father was already positioning him for real, big time business. Chime had little to do with the music anyway. He was just part of the bigger group as Olu’s friend. It’s not correct to include Davido in this matter.’

‘Besides,’ his daughter interjects, ‘Chime and Olu were not even around when Tagbo died. They were in Ibadan. That Monday they came to conclude a deal they were doing with the Oyo State government so that had nothing to do with them. I feel this was related to their business, not Davido. Somebody wanted to take out Olu and Chime was just unfortunate to be his guardian angel. He died because he was always close to his friend.’

‘We just want justice to be done,’ her father continued. ‘As a Christian, I had accepted my fate but when I saw the reports in the media; not even the blogs this time, but Punch- I had to speak out. My son was never, never a drug user.’

As the interview wrapped up, father and child stood up, blinking at the studio light. We thanked them for sharing their story with us. They thanked us for having them. Mr. Amaechi shook hands with me and once again, I expressed my condolences. ‘It’s okay,’ he said resignedly, ‘it’s okay…’