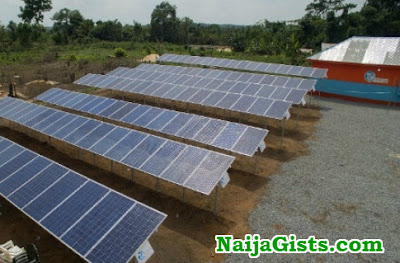 The three soldiers said to be attached to the 81 Division of the NA, have since been whisked away by some officers sent by the army.

It was gathered that the soldiers, whose identities were not given, were promised N150,000 to escort the stolen solar panels and batteries on September 5, before they were apprehended.

According to acting Police Commissioner Imohimi Edgal, the ‘armed’ suspects specialised in vandalising government, private properties at Epe, Sangotedo, Elerangbe and Badagry areas of the state.

He said 16 solar panels and 33 inverter batteries were recovered from the gang, adding that a total of 18 cultists and 22 armed robbers were apprehended.

Edgal said: “On September 5, at about 2:00 am, seven armed men invaded Okemagba Senior Secondary School, Epe, with three soldiers and a truck marked LND61XQ. They went straight to the solar panel and vandalised 71. They also forced the door of the container, where the inverter batteries and accessories were kept and stole.

“The local police were alerted and they mobilised a patrol team to the scene, where the suspects and three serving soldiers were arrested. Preliminary investigation led operatives of the command to track other suspects to Delta, Anambra and Imo States, where Festus Maduka was picked up in a hotel and he confessed to having received solar panels and inverter batteries from this armed robber.

Confessing to the crime, Ani said he had made about N4 million since he started the business in June.

Ani, who was a bus driver before taking to vandalism, said he recruited the other suspects, including the soldiers into the ‘lucrative business’.

He disclosed that they erased the caveat inscribed in some of the vandalised items before reselling them to end users.

“I used to be a bus driver. It was in June that I started this business. I sell each panel N25,000 to Festus at Arena market. I sell the batteries to him N27,000. I have made like N4 million from it but I used to settle all those involved very well. It was Festus that helped me to get the three soldiers. They knew that the items were stolen that was why the escort fee was high.

“The dismissed Air Officer was also introduced to me by Festus. He has trucks and we needed the truck to carry the panels and batteries we vandalised. They all were aware that the items were stolen. We stole from public schools and telecommunications masts.”

Odufoye, a dismissed Air Officer, denied he was a member of the gang, insisting that he was only contracted for haulage services, which he rendered innocently.