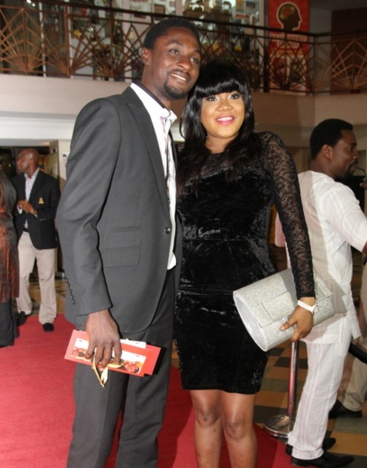 It is very likely actress Toyin Aikmakhu and her ‘ estranged’ actor husband, Adeniyi Johnson, have really moved on. It was in the news recently that the couple’s marriage had broken up due to irreconcilable differences.

There may be some truth in the rumour, even though Toyin has pleaded on the social media that her fans should respect her privacy and allow her to ‘heal’.

Anyway, her husband, who has not really said much since the drama unfolded, was at Mercy Aigbe’s movie screening over the weekend, beaming with excitement and laughing and exchanging banters with friends.

He made jokes with everyone on the red carpet before he stepped into the screening venue.

When Saturday Beats approached the young man to know if he was patching things up with his estranged wife, he politely declined to make any comment. Beaming with smiles, the actor pleaded that Saturday Beats should be sensitive to his situation.

Later in the evening, just as soon as Toyin got into the venue, Adeniyi disappeared!

Some guests whispered amongst themselves that Adeniyi probably left to avoid a scene or create a tensed atmosphere. Regardless, his estranged wife had a blast on Sunday as she danced and chatted cheerfully with her colleagues and fans, not caring about the hush hush going all around her.

By all indications, both parties made it obvious that they were doing very fine without each other and they had moved on with their lives.