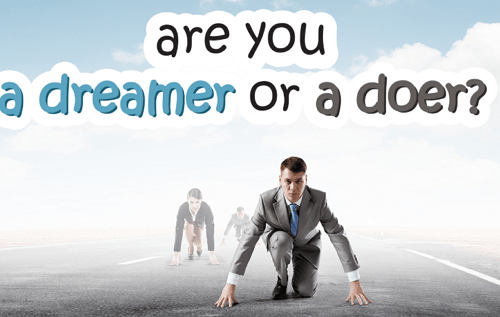 You Have Stayed Too Long In The Dreamland, It Is Time To Move Forward

A 35-year-old civil engineer based in Lagos, Mr Tayo has worked for OAB a leading construction service firm since his days as a National Youth Service Corp member. When he initially got the job, Tayo drew out a 7 year progress and exit plan for himself, his plan was to spend seven years at OAB. As a young undergraduate he had dreams to revolutionize the industry, he had taken interest in software programming and his plan was to merge his knowledge of programming with his knowledge in civil engineering to show the world a better and sustainable way to practice civil engineering.

His tenure at OAB construction was basically to help him gain hands on civil engineering experience and of course to understand the internal working of an organization. Ten years down the line, Tayo has spent every year at work telling everyone how he plans to change the civil engineering, and everyone who has heard about his plans have told him how great they are. People only have one question to Tayo, when are you going to start?

Tayo has not been able to even follow through with his progress and exit plan. The company of his dreams was supposed to have kicked off three years ago but there are no tangible plans on ground either for him to leave his current job or to start his company as what many people today call a side-hustle. Tayo feels stuck.

The truth about a lot of us is we are dreamers, ‘I have an idea’ is one of our most used phrases, we romanticize the idea being great, doing great things and changing the world, but these ideas stay in our head and make up our dreams at night, but do not feature in our realities when we wake up. Most of us are dreamers and not doers.

The dreamer is smart, open minded and creative. He has the ability to proffer solutions to problems (in his mind) and can often think outside the box. He prefers to stay in dreamland because he lacks the guts and courage to be a doer. He would come up with seemingly legitimate reasons (I call them excuses) on why his plans have not been put to action yet. The doer on the other hand has all the attributes of the dreamer, but as quick as he is to thinking so is he to action. He spends more time in reality than he does in his head. The famous Business man and Philanthropist once said W. Clement stone once said Thinking will not overcome fear, but action will.

A thinker embraces fear, he over-analyses situations till he successfully convinces himself that he is bound to fail. He is afraid of what people may say and what people may think and how people may receive or reject his idea. He highly craves the acceptance of others and without their acceptance would never move forward. A doer on the other hand understands that an idea is not to be shared with every tom, dick and harry, so he shares his ideas with forward thinking people alone, he understands the need for encouragement, so seeks for encouragements only from fellow doers who have done greater things. To say that the doer is not afraid is to lie, the doer has fears, but is ready to do It even while afraid. He understands that courage isn’t the absence of fear but it is the ability to press on even in the face of fear. As far as failure in concerned, the doer has mastered his fear of failure and accepts that failure is the rawest and most authentic form of feedback he can get.

Doers focus on execution, execution is consistent, regular and steady progress every day, execution for the doer means breaking down big tasks into smaller tasks and ensuring the smaller tasks get done so the bigger tasks become a reality. Execution means having a to-do list and a ‘got-done’ list to track short term and long term progress daily. Execution means saying no to distractions and focusing energy on the task to be done. The doer eats, breathes and lives execution.

For the dreamer you have to realise that if you don’t act nothing will change. Examine your reality, do you like your current situation? Will your life be better or worse if in the next five years you are stuck in your current situation? Be as brutally honest with yourself as you can be. The world does not reward you for your dreams, you only get rewarded for your actions.

For more information on how to move from a dreamer to a doer you can send me an e-mail at gbemieobadan@gmail.com or follow me on Instagram @coachgbemz

Remember the universe makes way and supports he who knows where he is going and takes action in that direction.

Continue Reading
You may also like...
Related Topics:doers, dreamers

How To Deal With Toxic Coworkers, Family Friends & Partners
How To Motivate Yourself To Work, Clean, Study, Lose Weight & Eat Healthy