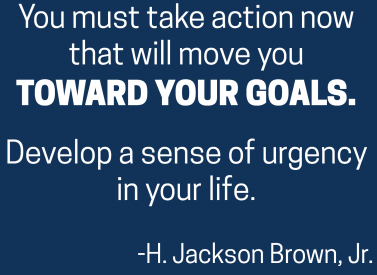 THE KEY TO SUCCESS IS MASSIVE ACTION

“The path to success is to take massive, determined actions”-Tony Robbins

The distance between your dreams and its manifestation is called action. The disconnect between ‘saying’and ‘doing’ is action.

Steve Maraboli once said, “Take action! An inch of movement will bring you closer to your goals than a mile of intention.”

I have observed that some people are so much knowledgeable but not successful.

The key to success is massive action. I have realized in life that taking action is better than waiting for perfection.

By acting you will learn three critical things: ‘What works’, ‘what doesn’t work’, and ‘what can be made better’. Wayne Gretzki said, “You miss 100% of the shots you don’t take.”

Confucius said, “The superior man is modest in his speech but exceeds in his actions.”

Success is a product of taking massive action in the right direction.

We must cultivate the habit of taking prompt action on what we know and have in the present.

Make mistakes, improve on your previous knowledge, and make better decisions.  After you’ve designed your goals, then you need to write down the actions that need to be taken for the realization of the goals.

There are many ways of going forward, but only one way of standing still- not taking actions!.

Contrary to normal belief, we don’t get tired because we are taking more action steps, we get tired when we don’t take any action at all!.

Even if you are slow in making decisions, you can compensate for this weakness by being prompt and quick to act. 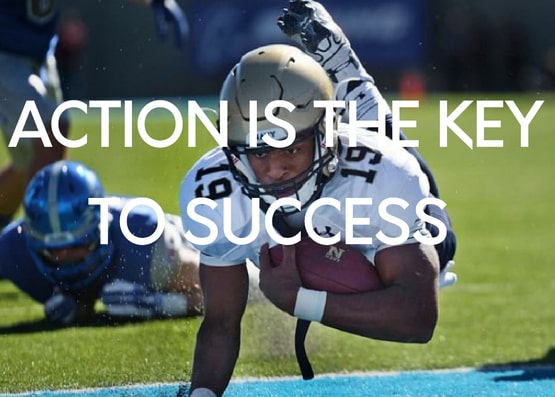 One man that exemplified the science of taking massive actions is Thomas Alva Edison, an American inventor and one of the greatest innovators of all time.

During his career, Edison patented more than 1000 inventions, including the electric light, the phonograph, and the motion-picture camera. In the period from 1878 to 1880 after Edison had built a small laboratory in New Jersey, he worked on at least three thousand different theories to develop an efficient incandescent lamp.

Many inventors had tried ever before him but couldn’t produce perfect incandescent lamps. By January 1879, Edison had built first high resistance incandescent electric light just as he desired but still the lamp only burned for few hours .

In order to get the perfect ‘filament’, Edison went from one experiment to another, he tested thousands and thousands of numerous materials to use for the filament, but they did not work with the tools available at that time.

He tested carbonized filaments of every plant imaginable; he tested no fewer than 6000 vegetable growths. He was never discouraged or inclined to be hopeless of success, despite his several mistakes. He finally discovered they could use a carbonized bamboo filament that last over 1,200 hours.

Though it took Thomas Edison about 10,000 trials to make the light bulb, he gave the world some of the best invention that has heralded the ‘modern’ world.

When a reporter tried to ridicule his various attempts by asking him how he felt to have failed for 10,000 times, he said something that stunned the whole world: “I have not failed 10,000 times. I’ve just found 10,000 ways that won’t work”!.

He has an unbreakable record; he not only eventually succeeded but established a system of electric power generation and distribution to homes. Edison also develops the first movie camera; he was the first to record sound. Edison gained worldwide acclaim for his inventions, and he continue working even with advancing age and in frail health, amassing a total of 1093 patents, more than any other inventor at that time. His last patent was obtained at age 83.

He died at 84 on October 18th, 1931 in New Jersey. Three days later on the night of October 21, as a national tribute proclaimed by President Herbert Hoover, millions of Americans turned out their lights to plunge the country into momentary darkness in order to illustrate how the world was before Edison discovered the light bulb.

When someone called him a genius, Edison made the famous reply, “Genius is 1 percent inspiration and 99 percent perspiration.” A statement that testify to his virtues of tenacity and persistency even in the plethora of his errors.

An overzealous reporter once wrote a headline about Edison:“God said ‘let there be light’ and there was Thomas Edison”.

He was a light to the world for when Edison died; the lights were put out as a tribute to this legend that set the world aglow with the discovery of the electric bulb light.

After you’ve designed your dreams and goals, the next thing is to make a Massive Action Plan (MAP) towards the achievement of the goals. MAP is a 3-step process designed by Tony Robbins to achieve tangible results and live an extraordinary life.

Once you have absolute clarity about the exact result you want and why you must achieve it, the next step is to create the MAP (Massive Action Plan) to get yourself there. Using a MAP goes beyond goal setting; it changes the emotional meaning behind all of your activities and forms a stronger link back to the outcome, making it more likely you’ll achieve it.

When you’re creating your MAP, ask yourself, “How much?”, “By when?” and “For what purpose?” Then write it down. Make it a permanent, tangible expression of your mental target. The three main components of MAP are:

Dreams don’t fulfill themselves. The habit of putting ideas into action is the key to success. Take more of actions and do less of talking.

You can’t build a reputation on what you are about to do, take actions! C.G.

Jung said, “You are what you do, not what you say you’ll do.”Enough of talking and start taking actions!.

Take daily actions that will lead you to accomplishing your goals.Faith without any accompanying action is suspicious!TALK is Nothing; ACTION is Everything.

Robin Sharma said, “The tiniest of actions is always better than the boldest of intentions”.

Chauncey Depew said,“The first step towards getting somewhere is to decide that you are not going to stay where you are”.

Visions without execution are just hallucinations. Visualize your success, then take actions!  Dreams become regrets when left in the mind, never planted in the soil of action.

Cultivate the winners’ habit of taking actions and leave the talking to others.

Dale Carnegie said, “Inaction breeds doubt and fear. Action breeds confidence and courage. If you want to conquer fear, do not sit home and think about it. Go out and get busy.”

Action is the antidote to despair! No matter how despairing or herculean a task seems, take the necessary actions. The only impossible journey is the one you never begin.

Martin Luther King, Jr. said, “Take the first step in faith. You don’t have to see the whole staircase, just take the first step”. Not in speech, not in thoughts, I see greatness, only in actions!

QUOTE OF THE WEEK: “You will either step forward into growth or you will step back into safety.” -Abraham Maslow

Dear Single Lady, He Needs To First Be Your Soulmate Before He Qualify To Be Your Bed-mate
Seeking Validation From Others Invalidates You! Stop Waiting For People’s Acceptance, Live Your Life On Conviction