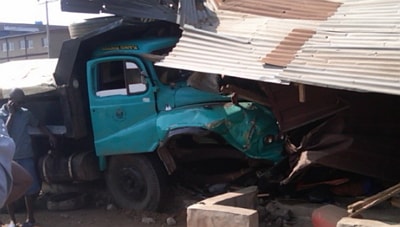 A truck, which had lost control of its brakes, rammed into two teenagers from Orhia-Abraka, whose identities could not be ascertained, when the driver of the vehicle veered off Abraka-Agbor road.

The sight of the mess made of the corpses by the truck triggered the angry reaction from members of the community, who went berserk, more especially as the driver of the truck had taken to his heels, abandoning the vehicle at the scene.

A community source who relayed the development to the Nation in Warri on Friday said an angry mob which took over Abraka Agbor road went after every passing vehicle along the busy expressway, attacking drivers and leaving hundreds of travelers stranded while the melee lasted.

“The sight was ugly; those boys were smashed beyond recognition and to make matters worse, the driver of the truck bolted before people could gather. The community boys were incensed by the sight of the corpses of the boys and they started attacking other vehicles traveling along the road around that time.

“Policemen from the Abraka Division came, but they left the first time because they said they didn’t have a vehicle to evacuate the corpses with, but they later returned to park the body parts”, the source who did not want to be named explained.