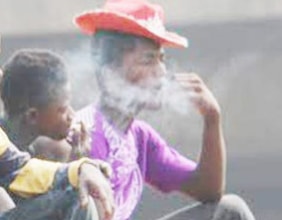 The 24-year-old suspect reportedly hacked the octogenarian to death while she was asleep.

We learnt that the suspect lived with the grandmother, Maria Ogabi, at Ishagira village, Ijanikin, Lagos.

A source said Christian had been having a running battle with the deceased, who always complained about his use of drugs.

The source explained that although he did not know the immediate cause of the attack on the woman, Christian was recently released from prison over a criminal case.

He said, “He is on drugs and well known for taking hemp. He has been living with the grandmother for a long time. I don’t know where his parents live. The grandma always warned him against smoking hemp, but he would not listen.

“In the early hours of Saturday, April 2, there was a distress call from their apartment. When people got to the place, the woman was found in a pool of blood with machete injuries on her body. She died on the spot.

“The case was reported to the police at the Ijanikin division and he was arrested. He just came back from prison.”

The PPRO, Oti, said the corpse had been deposited in the Badagry General Hospital mortuary.

He said, “The police received a report that the 80-year-old woman was hacked to death by the grandson, Musendiku Christian, at their residence.

“A police team visited and photographed the scene of the incident. The corpse was removed and taken to the general hospital mortuary, Badagry, for autopsy. The exhibit was recovered and the suspected arrested.”