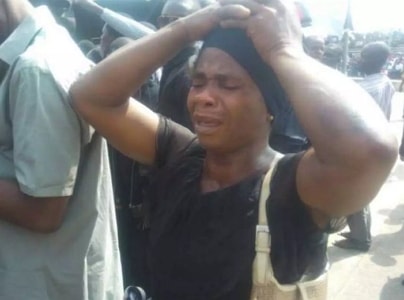 A High Court in Otuocha area of Anambra today sentenced a Cannabis dealer to death by hanging for killing policeman, Late Corporal Oluwadaini Temidayo, at Oye-Olisa market, Ogbunike, in Oyi Local Government Area of the State.

The defendant, Chukwuebuka Nneji-Olona, reportedly beat the officer to death with stones and wooden planks on May 2, 2014, contrary to section 274(1) of the criminal code.

According to the prosecuting counsel, Mrs Stella Ofokansi, the deceased was a corrupt policeman, working at Nteje Divisional Police Station who monthly visited the Indian hemp dealers’ shops at the market.

“He demanded and collected bribes from the illicit drug dealers in order to keep quiet over their illegal business.

“But luck ran out of the corrupt policeman when he stormed the market in company of other police officers to raid the shops of the illegal Indian hemp sellers, after coming the previous day to collect his usual bribe money.

“This action by the corrupt police officer brought about so much anger, resistance and resentment from the drug peddlers that they physically assaulted him with stones and woods leading to his sudden death.

“The defendant, feeling guilty that he killed the victim in cold blood and for fear of being caught, ran to the house of a herbalist known as Ajana-Oyibo to do a spiritual work that would free him from the guilt of killing the deceased which was disturbing him.

“The said native doctor reported the matter to the local vigilante operatives, who arrested the defendant and handed him over to the Divisional Police Station at Nteje for investigation and persecution.”

Delivering judgement on the matter, Justice O.C Amaechina said, “After considering the evidence before me , I am left with no doubt as to the facts put forward by the state.

“I accordingly hold that the facts alleged by the state have been established beyond reasonable doubt”.

“I therefore held the accused liable of unlawfully killing of the deceased and found him guilty as charged. Hence the defendant has been sentenced to death by hanging.

Reacting to the judgement, the prosecution counsel, Mrs Stella Ofokansi said the judgement would serve as a deterrant to everyone that the law abhors jungle justice.

She added,“ I hope people will learn that they can not engage in unlawful mob action and get away with it”.