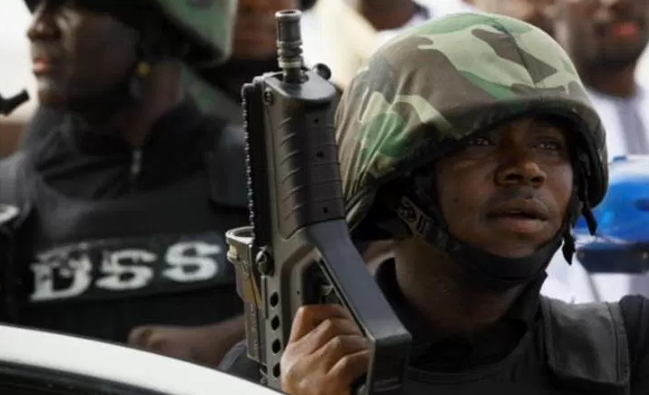 The DSS today announced plots by extremists to attack selected locations across Nigeria during the Eid-el-Fitr celebrations.

The warning contained in a press statement warned the general public to look out for suspicious packages and persons during the celebration.

The statement announced the arrest of 14 suspected kidnappers, 2 Niger Delta Avengers militants and other criminals across the country.

One Kabiru Shuaibu, the leader of a kidnap gang in the North was caught in Lokoja Kogi State. Kabiru and 3 accomplices Abdulmumuni Adamuna,Tukur Shuaibu and Haruna Saleh were caught on Murtala Muhammed Bridge with a local pistol, 7 cartridges, 14 mobile phones and N615,000.

A Niger Delta Avengers militant Christian Oluba aka Sensor was caught while perfecting plans to bomb critical oil and gas pipelines in the Niger Delta region.

Also arrested was one Chidiebere Onwudiwe, a member of Indigenous People of Biafra (IPOB).

The suspect was arrested along with his associates on June 22, 2016 while planning coordinated attacks against religious bodies, government buildings, police checkpoints and computer village in Ikeja Lagos.

He caught while making logistics supplies for the attack.