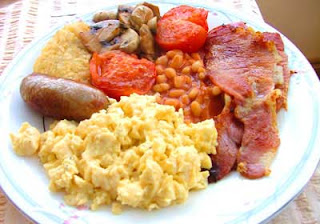 For people like me who sometimes skip breakfast due to busy schedule, a new research published in the US has linked skipping breakfast with heart attacks.

The researchers said men who skip breakfast may face a higher risk of heart attack or deadly heart disease. The conclusion was the result of a study of nearly 27,000 men. The researchers found that those who failed to eat in the morning had a 27 percent higher risk of heart attack or death from coronary heart disease than those who did.

Those who did not eat breakfast tended to be on the younger side and were “more likely to be smokers, employed full time, unmarried, less physically active and drank more alcohol.”

“Skipping breakfast may lead to one or more risk factors, including obesity, high blood pressure, high cholesterol and diabetes, which may in turn lead to a heart attack over time,” said Leah Cahill, lead study author and a researcher at the Harvard School of Public Health.

The men who said they ate breakfast also appeared to eat one more time per day than those who did not, suggesting that those who skipped breakfast did not make up for the lack of food later.

Ninety-seven percent of men in the study were white and of European descent, but researchers said the results should apply to those of other backgrounds as well.