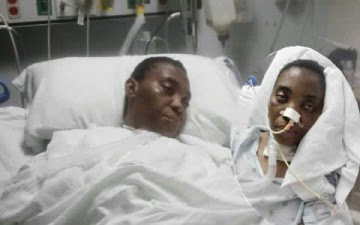 A young Nigerian banker who went into coma back in 2013 months after arriving the United States of America has passed on.

The lady identified as Ebere Ukwu died on Monday at the ICU of Wake Medical Center in Raleigh North Carolina around 12:05am.

Ebere Ukwu, dreamt of elevating her life in America. She wanted to experience the different culture and lifestyle of North America. After she lost her job as a bank manager during Nigeria’s financial meltdown, she decided to move to USA, to live out loud. She embraced all things American. But she never got a chance to romance the intrigues of life and living here. On June 1, at 12.05 a.m, Ms. Ebere Ukwu’s dream died with her inside the Intensive Care Unit of Wake Medical Center in Raleigh, North Carolina. She had been in coma for more than two years. 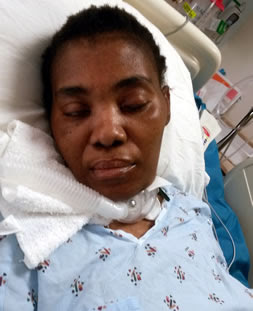 Miss Ukwu hours after her death.

Her brother, Mr. Ezuma Ukwu, issued this statement when contacted: “The news of her transition is devastating to the family. On the 1st of June, I received a call at about 2.30am Nigerian time from the medical staff that her condition had deteriorated and by 5.20am another call came in that she had passed on. We find solace in the fact that she made Christ her Lord and saviour; she’s resting in His bosom. The vacuum left by her cannot be filled, but we take solace in the fact that this is only a transition to a place where we’ll all meet and never to part again. We appreciate all those who have been with us in prayers.”

She was an ambitious dreamer that wanted to explore her young world and excel. The ICU room wasn’t supposed to be her final destination. But early spring of 2013, her exciting life of adventure suddenly collapsed during a visit to the Emergency Room for minor aches, pain and high body temperature.

Ebere arrived USA during the cold winter month of November 2012, in pursuit of life, liberty, happiness and opportunities. She anchored her new residence at her sister in-law’s place in Atlanta, Georgia. Atlanta was not friendly to her dreams of relocation and quick employment privileges. Ebere soon left Atlanta for Maryland, at the invitation of an extended family friend, to try few available menial jobs targeted towards new immigrants wishing to settle into a different social structure and culture. Ebere accepted an offer as a part time nanny. She was frustrated by the lack of appeal and job satisfaction. This wasn’t the job she expected from the land of dreams. Two months after her first job, she quit. Ebere was diabetic. During one of her daily chores as a nanny, she split her big right toe. The small gash was infected, thus, it resisted casual self-medication. But Ebere kept nursing the minor wound.

Ebere reconnected with Tunde Atiku, her sister’s ex-boyfriend who lives in Raleigh, North Carolina. She pleaded for Tunde’s assistance with employment and a new life direction. Tunde invited her to visit Raleigh and search for better employment opportunities she desired.

Tunde Atiku, a registered nurse in Raleigh shared the stages of Ebere’s life to the end of her time last week.

“Jebose, I met Ebere and her family during our university days at Lagos State University. Her older sister and I were lovers. The family welcomed me into their home. I was always around them and I am grateful for those university days when their home gave me love, comfort and a great girlfriend in Lara. Years later, after our university education, we went separate ways as life demanded. I moved to the United States. In November 2012, Ebere called from Atlanta and informed me she was in the United States. Her immediate desire then was to legalise her stay in the country. She came into United States with some money to help her settle her immigration status. She didn’t want to marry to get her legal status. She hoped for a real marriage. Thus, in Atlanta, she was introduced to several suitors but she found none of them serious. Employment was becoming a challenge; her finance was draining by daily living and hustles in America. She wanted to work; through a friend, Ebere found a baby-sitting job in Maryland. She relocated to Maryland in April 2013 to become a baby sitter to one Igbo lady, a mistress from hell. She called me every day, complaining of her hardship, mental abuse and threats from her employer. She would complain about mistreatment and irregular payment from the lady. I encouraged her to leave the job and relocate to Raleigh and live with me. I promised to help find her a decent job, free from daily verbal abuses and indignity. Ebere wanted the American dream. She went through hard life in Maryland because of this thing called the American dream. Jebose, imagine your employer, a fellow Nigerian, threatening to call the law on you because of your immigration status and withholding your agreed income. Ebere took care of her boss’ three children and also did housekeeping for the family, yet they tormented her.”

“While working as a baby sitter for this lady, she hurt her right big toe. But she kept nursing the toe, using off the shelves medication. But the toe got infected and bruised when she came to join me in Raleigh. One week after her arrival here, she knocked on my door one night and complained of severe body and foot aches. Her right big toe was swollen. I suggested we go to the hospital, she was scared because of the silly stories she was told in Maryland that doctors and nurses would report her to immigration if she visited any hospital and she would then be deported. She was afraid that she could be deported. I told her that what mattered most was getting treatment for the toe. I convinced her that doctors did not care about her immigration status before or after treating her. Eventually, we went to an urgent care for initial treatment. The nurse recommended we go to the E.R because the toe had been infected and might need aggressive treatment. We tried another urgent care for second opinion; it was consistent with the first diagnosis. We then went straight to the hospital on Sunday, April 28, 2013.

“We arrived at Wake Medical Emergency Room that afternoon, waited for three hours before a doctor could attend to us. The doctor told her that her toe had been severely infected and it must be amputated. He also told Ebere that blood test on her indicated she had diabetes. Because of her diabetic condition, the infected toe had to be amputated in order to stop infection from spreading all over her body. She said she didn’t want to lose her toes and suggested antibiotic treatment. She told me she was not married yet and couldn’t see herself walking everywhere without a toe, as a single lady.

The hospital immediately placed her on admission. It conducted a lab test on her and few days later, the lab result showed she had kidney problem; her kidney was not functioning properly. So the hospital determined it would flush her kidney. Her blood sugar was very high, at 360 level. The normal blood sugar is between 90 and 110. The hospital pumped her with insulin, to control her sugar level. Her blood pressure was considerably normal but the kidney and blood sugar were continuously high for a long time. Because of kidney problems and diabetes, the hospital determined not to discharge her. Five days after she was admitted, I asked why she hadn’t been discharged. She said the hospital was still running tests.

“She called from the hospital to inform me that the pump that the hospital used to pump medication into her, was affecting her breathing pattern. I told her that fluids might have been overloaded. I instructed her to complain to the hospital that it was overloading her with fluids… she did and they removed some of the pumps. She felt better. Few days later; the hospital gave her the I.V. pump again. Ebere called and told me. I advised her that if she wasn’t feeling well, she should call them and ask that it should be removed.

“On May 12, 2013 at 5p.m, I called her hospital room but she would not pick the phone. I called several times. No answer. The next morning, I went to visit her, she had been moved from her room. The hospital informed me she had cardiac arrest the previous day. No one was monitoring her. Cardiac arrest is brain damage. Her brain damage was 75 per cent. The remaining 25 per cent was controlling just the internal organs. The hospital immediately placed her on full life support. After the cardiac arrest and while she was on life support machine, the hospital cut her toes to remove the bacteria in the system.

“Every day, I visited Ebere at the hospital and also discussed with doctors about her condition with regards to her care. Initially, the hospital wanted me to take her to a nursing home or to an adult daycare centre. She didn’t deserve to be thrown to a hopeless place. I refused to sign any documents to have her removed from the hospital to any assisted living facility.

“Ebere suffered. When you have a brain damage, you are gone. I told the family to allow the hospital to let her go. They left her in the hands of the hospital. They should have pulled the plug on her a long time ago. She spent more than two years on life support machine. More than two years brain dead. That’s sad. But she is at peace now. I blame the hospital for her death. She walked into the hospital for care but died hopelessly. WakeMed was negligent. There was no proper monitoring of the patient while she was on I.V. How many times did the hospital nurses assigned to her do ground checks on their patient to make sure she was not in any pain or in deterioration? I am a registered nurse. Nurses’ standards and procedures require that checks of patients in critical units be done every 15mins. Ebere was abandoned, she had cardiac arrest with 75 per cent brain damage… if they were doing the checks on her, they could have found her in pains and difficulty in breathing, then quickly rescue her with treatment.”