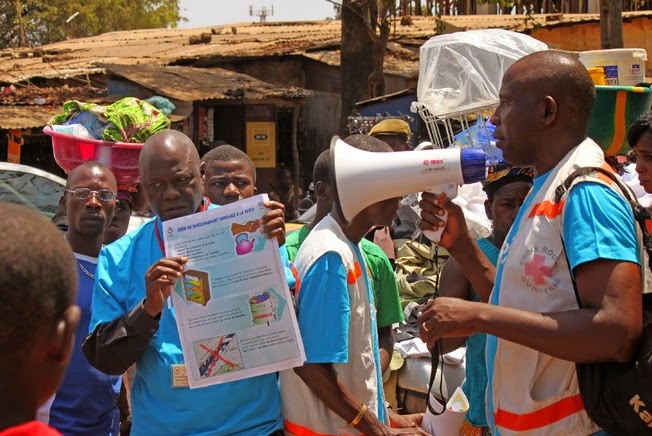 Ebola Virus dated back to 1976 was found in Monkeys in the depths of the jungle in Africa.

The epidemic of the deadly virus has been spreading around Africa at an alarming rate.

The number of victims, according to official figures, has already exceeded a thousand people and very close to 2000. The number of infected individuals nears almost five thousand. The WHO declared the disease a threat of global significance. Are there ways to combat the fever?

It turns out that there is a vaccine against Ebola. Pentagon scientists were developing it for 30 years, and all the rights for the drug belong to the government of the United States. Two infected US medics received injections of the vaccine and they started recovering from the disease immediately.

Why has this been made public only now? Why is it the USA that holds all the rights for the use of the vaccine? There can be two most obvious answers found to these questions.

As one can see, Ebola is a perfect biological weapon: it spreads quickly and gives nearly 100 percent mortality. Those having the life-saving vaccine can dictate any conditions to others.

The second answer is a purely commercial interest. It is enough to arrange panic with the help of the media, as it was the case with several epidemics before, such as avian flu. Afterwards, it will be possible to sell the life-saving medicine at any price.

However, Russian scientists doubt that the Americans created the medicine indeed.

Russian scientists also conduct the research to study the nature of the virus to be able to create the vaccine against it. Soviet scientists, for example, Professor Alexander Butenko, was a member of the joint Soviet-Guinean expedition in 1982 and spent nearly a year in the rain forests of Guinea, when the then unknown virus was discovered.

The current distribution of the infection is a continuation of a dangerous outbreak of the disease from 1982, said Professor Butenko. Russian scientists have the most extensive scientific base for the creation of the vaccine, Butenko says. The materials that Alexander Butenko collected a quarter of a century ago should help today’s generation of Russian scientists in the development of the vaccine against the fever.

[About the author: Abisola, A US-trained Nigerian Neurologist writes from Spain]