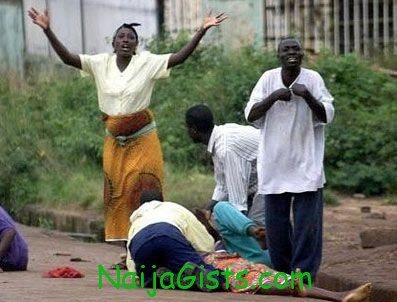 The death toll from the weekend attack by unknown gunmen on indigenes of Ezillo community in Ishielu Local Government of Ebonyi State has risen to 67. This followed the discovery of 10 more bodies in  bushes. naijagists.com

We learnt that  youths who combed  bushes, burnt houses and other places within the community found the bodies.

A youth leader, Monday Eze, said the youths worked through out the weekend in search of more bodies, adding that so many families are yet to see some of their members.

He said: “We didn’t rest the whole of Saturday and Sunday because we had to comb all the bushes, paths, burnt houses, vehicles to ensure that all the bodies were recovered.

“As at Saturday night after Governor Martin Elechi and his entourage left, 10 more bodies were recovered from the bushes.”

Eze noted that the youths continued the search because so many families were complaining that they are yet to see some of their members.

“When we get such information, we comb nearby bushes around the house because it is expected that the people must have entered any nearby bush in their compound and whenever we engage in such search, we always recover one or two bodies.”

He said some of the families have buried their dead, in compliance with the directive of the governor, adding that the death toll was high and keeping the bodies in the mortuary would hurt  the more.

The Assistant Inspector General of Police (AIG) in charge of Zone 6, Calabar, Saidy Daya, yesterday visited the scene of the attack.

The AIG called on the Inspector-General of Police, Hafiz Ringim, to establish a mobile police unit in the troubled area.

Daya said the team of mobile policemen from Cross River, Rivers and Akwa Ibom states deployed in the area has arrived on the scene.

He said the police would ensure that no indigene of the state is posted to the area to forestall investigation.

The AIG said detectives would also be sent from the Force Headquarters to join in the investigation.

Daya urged the people to remain calm, noting that the policemen deployed in the area would ensure the security of life and property.

In a broadcast yesterday, Elechi said the attack was a resurgence of the Ezza-Ezillo communal crisis.

The governor said the incident was a phase in the cycle of destruction and bloodletting which has been the lot of Ezillo since May 10, 2008, when the crisis started.

“The shock of the latest incident is not only because of the destruction, but also it came at a time when Ebonyi people and other Nigerians thought that peace had returned to Ezillo.

“As Ezillo burns and Ebonyi people mourn, I want to assure our people and all Nigerians that the government will stop at nothing to fish out the perpetrators of this dastardly act.

“Neither shall we shirk our responsibility to protect life and property everywhere in the state. We all feel the pains of the bereaved families and we all share their grief,” he said.

The governor assured residents that security agencies will clear the Abakaliki-Enugu Road of any blockade to ensure the normal flow of traffic.

The Abakaliki-Enugu Road cuts through Ezillo Community. The road is always closed each time the recurrent communal conflict starts.

Elechi said he has directed the State Emergency Management Agency (SEMA) to assess the conditions in the area for immediate state intervention.