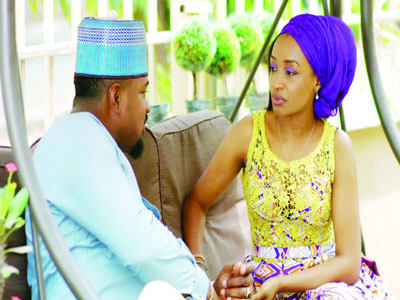 Oct 10, 2016 – EbonyLife TV Stands With Rahama Sadau Banned From Kannywood, Features Her In New Sons Of The Caliphate Drama Series

On Thursday the 13th of October 2016, EbonyLife TV will premiere Sons of the Caliphate, a drama series based on the lives of rich, entitle, passionate and ambitious young men, Kalifah, Nuhu and Diko.

All three are caught up in the hidden corners of power, the darkness of addiction, the heat of love and desire, the obligations of family loyalty, and the craving for revenge.

Producers say that the 13-part drama series will take the audience on a journey into the rich, cultural and flamboyant aristocratic lifestyle of Northern Nigeria as they get to see what happens when elections are fast approaching and how the tussle for the governorship seat heats up the polity in the Northern Caliphate State of Kowa.

Created, written and produced by Dimbo and Karachi Atiya, Sons of the Caliphate is set to reposition the stereotypes about Northern Nigeria in a way people have not imagined before.

Sons of the Caliphate stars some of the most prominent names in the Film and TV industry, including Patrick Doyle, Mofe Duncan, Sani Muazu and Rahama Sadau, who plays the role of Binta Kutigi a confident, intelligent, witty and composed Northern ‘chick’ who is stylish, elegant and yet traditional. Rahama was however recently banned from Kannywood.

“We at EbonyLife TV stand with Rahama Sadau and remain proud of the work she has done thus far. We believe that nobody is above mistake and we all deserve second chances. We certainly hope that the ban is revoked so that Rahama can continue her career and blossom to her full potential,” a statement from the producers read.