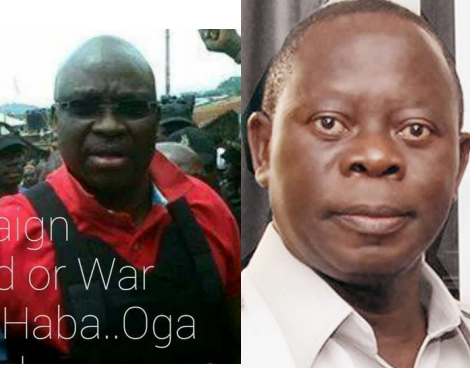 Yesterday Governor Adams Oshiomhole of Edo state engaged newly elected governor of Ekiti state in a hot war of words over the state of the legislature in their respective states after Fayose badmouth him in one of his interviews.

“We find it utterly laughable and as the height of political childishness for the Ekiti State governor to hide behind his media aides and seek to drag the name of the Governor of Edo State, Comrade Adams Oshiomhole, into his crude gangster tactics, which he has re-introduced into Ekiti politics less than two months after assuming office.

“If the Ekiti governor is too lazy to read and too politically-illiterate to know what is happening in Edo State House of Assembly, we expected his psychedelic media aides to simply shut their loud mouths rather than behave like capering neophytes.

“Even a kindergarten knows that 15 is greater than 5. So if five PDP members decide to sit with three suspended members and another, whose seat was declared vacant, in a chamber which is undergoing renovation, then we can at best regard that as the height of crass legislative irresponsibility.

“It is ridiculous to even contemplate that the Ekiti governor and his media aides do not know that 15 is greater than five. For sure, they seem engrossed with their stomach infrastructure mantra, such a dubious contraption which can only be contrived by an ideologically-clueless and gluttonous administration.

“But for the kind of democracy we practice in Nigeria, where the PDP promotes and condones all manners of illegalities, inanities and shenanigans which have become the second nature of that party, Ayodele Fayose would have been cooling off his heels in gaol rather than brandishing the appellation of being a governor.

“We are thoroughly ashamed that Ekiti, hitherto known as the fountain of knowledge, is being reduced to a mindless bubble by a man running her affairs without a discernible direction like a drowning man clutching desperately at flotsam.”

Fayose also fires back through his media aide:

“Here we are with a supposed progressive comrade governor perpetuating illegalities in Edo State with lawmakers of his party, APC, sitting exclusively in the Government House where he resides with his wife and children; and instead of his aides to remove the timber in their boss’ eyes, they are getting concerned with the toothpicks in another person’s eyes.

The reality is that whether the APC lawmakers are 15 or 5, the lawmakers cannot sit anywhere else apart from the state House of Assembly. Or are they saying that the National Assembly can also relocate to Tafawa Balewa Square in Lagos?

“It is our advice that Governor Adams Oshiomhole should solve the problems in the Edo State House of Assembly and stop meddling in the Ekiti State affairs because on June 21, 2014, the people elected their governor in person of Ayodele Fayose, and millions of APC evil machinations cannot stop him from governing Ekiti State for four years.”

Governor Adams Oshiomhole is a member of the APC party while Fayose is a PDP member.