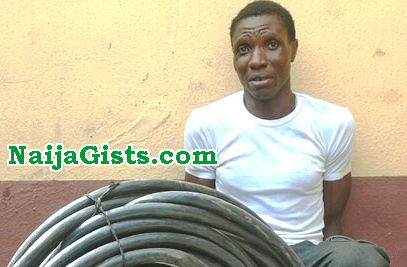 A Gudu Upper Area Court in the FCT on Friday sentenced a 25-year-old man,Obioma Ozokwe, to seven strokes of cane and cleaning of court toilet for stealing N250,000 worth of cables.

Ozokwe pleaded guilty and was convicted on a two-count charge of criminal trespass and theft.

The Upper Area court judge, Mr Umar Kagarko, cautioned the convict to desist from a life of crime and to learn a trade.

The Prosecutor, Mr Gabriel Ayana, had told the court that Gbenga Agani of Apo Resettlement reported the matter at Apo Police Station on Oct. 24.
Ayana said that the complainant reported that Ozokwe trespassed into his building site and stole armoured cables valued N250,000.

“The cables belonged to the residents of the area who kept them in the site for safety,’’ Ayana said.
He also said that during police investigations, the stolen armoured cables were recovered in the convict’s possession.