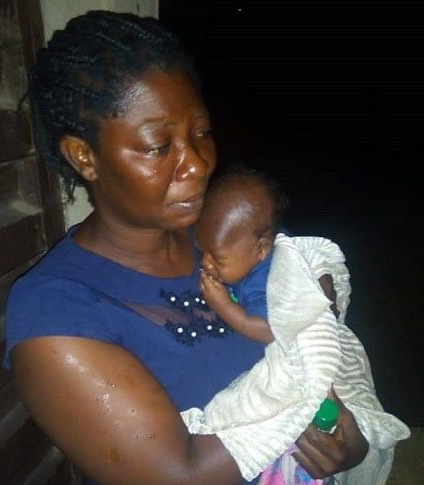 A woman who stole baby in Ado Ekiti has blamed her action on thirst for a male child.

The 39-year-old identified as Mercy Momoh was arrested over the weekend after police accused her of stealing a 2-month old baby boy from her mother in Ado Ekiti.

The indigene of Edo state was picked up at her home at Odo Aremu area of Ado Ekiti.

According to investigation, the baby was stolen from his mother, Mrs Funmilayo Sunday on Friday around 1pm at the State Secretariat.

It was gathered that the suspect tricked the baby’s mother into following her to the State Secretariat ostensibly to collect some relief materials being given by government to flood victims.

The suspect, on getting there, sent the baby’s mother to buy phone airtime for her, and then ran away with the baby before his mother returned.

“It is confirmed that the woman who stole two-month-old baby has been arrested by the operatives of the Ekiti police command.

“She was apprehended through intelligence made available to the police and would be prosecuted after conclusion of investigation.

“Investigation is still on going. More details will come to reveal what really transpired.”

“We call on members of the public to be careful when dealing with strangers. The suspect was apparently nice to the victim, that was why she got the baby easily. Citizens should not be carried away by kind strangers,” Ikechukwu said.

A source said the police were informed of the incident by the baby’s mother on the same day, at about 4.30pm.

Police detectives moved in, tracing the suspect to her residence, where she was arrested around 11pm.

According to her, the suspect confessed that she stole the baby because of her dire need of a male child.

The suspect claimed that due to her inability to bear a male child, her husband got married to another woman and may likely throw her out of the house.