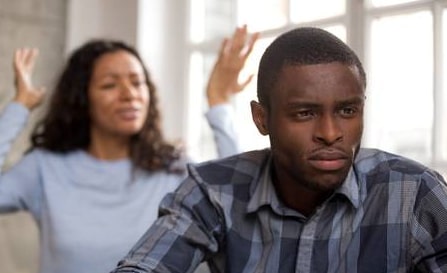 An FCT High Court, Jabi on Monday dissolved a five-year-old union between Lynda Dike and her husband Jude Ajaero, on grounds that he was legally married to another woman in Germany.

Dike in her petition sought for the dissolution of the purported marriage through Sections 3 (1) (a) (d) and 34 of the Matrimonial Cause Act.

The sections which stipulated that any marriage purportedly celebrated when one of the parties was lawfully married to another when consent was obtained either by fraud or duress would be void.

The Act further stipulated that a petition for nullity can be instituted by the ailing party.

Delivering judgment, Justice Charles Agbaza, held that the sole issue to be determined by the court was whether the petitioner had successfully made out a ground for the court to grant the relief she sought.

The judge further averred that Ajaero, the respondent who was served with court processes , hearing notices did not file nor answer to the petition, but had legal representation and neither did he challenge the evidence of the petitioner, rather he rested his case on that of the petitioner

According to Agbaza, ” the implication of this is that the court will deem the unchallenged and uncontroverted evidence of the petitioner as true,correct ( as long as it is credible) and act on it”.

Agbaza concluded and said “because the evidence brought by the petitioner was not challenged by the respondent,

“The court hereby pronounce a Decree of Nullity of the purported marriage conducted between Lynda Dike and Jude Ajaero on Oct.2,2014 at the Federal Marriage Registry, Abuja, on the ground that the marriage is void.

” The court hereby grants an order nullifying the said marriage”, he added.

In her petition, Dike said that when she married the respondent, he told her that he was not married.

She further submitted that however, when she traveled to Germany to see the respondent and instead of taking her to the address she knew he lived, he took her to a different address..

According to the petitioner, when she demanded to be taken to the address of where he lived, she was beaten up by the respondent.

She said this action prompted her to tail the respondent to the aforementioned address and that was when she discovered that he lived there with his German wife.

Dike added that she confronted the respondent and he admitted that he was married to the German woman and that they had been married for over a year before he came to Nigeria to marry her.