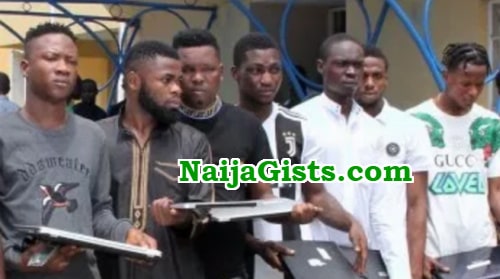 There was confusion in Imo state capital city of Owerri today as EFCC operatives carried out an unexpected raid on suspected internet fraudsters aka Yahoo Boys.

The operatives of the Economic and Financial Crimes Commission from Enugu reportedly arrested 25 suspects in the operation that lasted several hours .

The raid was carried out at a highbrow area of Owerri called Spibat avenue.

A resident of the Spibat avenue told our correspondent that the EFCC operatives who were armed stormed the avenue and started raiding houses being occupied by their targets.

“On arrival, the EFCC operatives condoned off the street,block the gates leading to the houses of their targets and started raiding the apartments. Their operational modality was scary, so we ran away.

“Many people, especially young boys were arrested. Cars, laptops and expensive phones, especially iPhones were equally impounded and recovered by the EFCC operatives.”