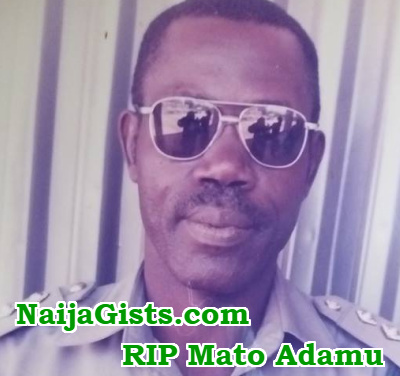 Acocrding to reports, the Chief Superintendent of Customs was beaten to death on Friday the 17th of May 2019 when  some thugs allegedly attacked him and his family at their apartment, Flat 10 Customs Block 12 Gowon Estate.

The 56-year-old was rushed to the hospital in an unconscious state following the attack. He was later confirmed dead at the Lagos State University Teaching hospital in Ikeja.

His wife, Faida who is still in shock is now staying with his relatives.

Here is what a neighbour said about the attack:

“This place is no longer secure and ever since my colleague’s death, I have been contemplating moving out of here. We are hearing different versions of what led to Mato’s death; some people are saying that he was killed by armed robbers, who came to rob his family, while others said he was trailed to his apartment and killed by assassins.

“But the best source of getting the true position of what happened is the police. Mato’s wife is now staying with his relatives. I plan to visit the police station to know how far they have gone with the investigation, because ever since his death, we have not heard anything from them. We want justice for his death.”