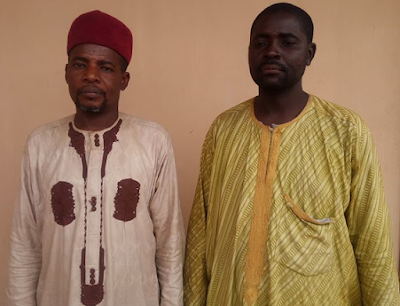 The EFCC today arraigned the duo of Usman Liman and Sanusi Mohammed before Justice A.A Aderemi of the Oyo State High Court Ibadan, on an 8-count charge bordering on conspiracy, forgery and stealing of N55,104,579.84 (Fifty Five Million One Hundred and Four Thousand, Five Hundred and Seventy Nine Naira, Eighty Four Kobo)
The accuse persons, however pleaded not guilty to the charges.

Justice Aderemi granted the accused bail in the sum of two hundred thousand Naira only with two sureties each in like sum. The sureties must be civil servants working in Oyo State, not below grade level 10, and must have landed properties in Oyo State and depose to an affidavit of means. They are also to report every first Monday of each month at the Economic and Financial Crimes Commission (EFCC) office, in Kano pending the determination of the matter.

Usman and Mohammed’s journey to the dock followed a petition to the EFCC alleging that sometime in November 2012 the duo approached Rola Enterprise Limited, a company that deals in various brands of motorcycles and 3-wheelers, at Ibadan, that they needed 500 units of qinqoi (QM125-4) Motorcycles on credit for members of their Co-operative Society at the Federal College of Education, Technical, Gusau, Zamfara State.

The company informed the duo that for a supply of such magnitude, appropriate documentation was necessary. The duo allegedly presented forged documents to secure a deal and diverted the 346 motorcycles to their personal use.

Justice Aderemi adjourned the matter to March 27 and 28, 2017 for the commencement

Continue Reading
You may also like...
Related Topics:2 steals, motorcycles