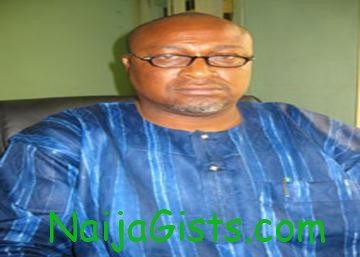 The anti-graft agency at the end of the eight-hour operation carted away documents and 13 vehicles. The EFCC could not find Ajimuda in his office on arrival. But the staff of the oil commission alerted the police that kidnappers had invaded the OSOPADEC premises on Oba Ile area of the capital city.It took the intervention of the Police before normalcy could be restored as the workers engaged the EFCC officials in a shouting match.Ajimuda was later found on the premises of his neighbour in the Alagbaka, Akure, wearing white singlet and (boxers) shots, barefooted and was escorted into his house.After hours of searching, the EFCC officials, who came in three vehicles, carted away some documents believed to be useful to their investigation.

The OSOPADEC chairman was later whisked away around 2.30pm by the anti-graft agency officials in one of the 13 cars recovered from his compound.However, it was learnt that the arrest of the oil producing area development commission boss might not be unconnected with the petition alleging fraud against him.Reacting to the development, the state Commissioner for Information, Mr. Kayode Akinmade, faulted the proceedure adopted by the EFCC to arrest Ajimuda.

He said, “It is not proper for the anti graft agency to just invade the office and home of the OSOPADEC boss and arrest the man without any formal invitation.”