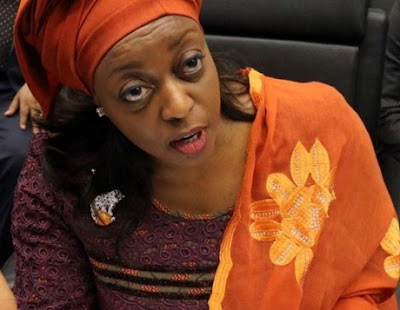 Nov 8, 2017 – EFCC Releases Document On How Diezani Shared Her Loot With 36 Persons Ahead Of 2015 General Election

The commission said Alison-Madueke allegedly shared $115,010,000 (about N35billion) to different individuals in 36 states ahead of the 2015 general election.

A Senior Advocate of Nigeria (SAN) Mohammed Belgore and a former minister of National Planning Prof Abubakar Suleiman are on trial before Justice Rilwan Aikawa of the Federal High Court in Lagos.

EFCC accused them of directly receiving N450million in cash from Alison-Madueke without going through a financial institution. They pleaded not guilty.

The money they received, the commission said, was shared to electoral officers and others in Kwara State.

Suleiman and Belgore, according to documents tendered by EFCC, collected N450million on behalf of Kwara.

Every other state also got part of the cash, according to documents sighted by our correspondent Wednesday.

The commission tendered two documents marked as Exhibits 7 and 7A, with breakdown of how the monies were to be shared.

According to the document, a total of N155, 220,000 was shared among the electoral officers in Kwara.

Another document entitled: Security and Transportation Per State, also tendered by the commission, contains a breakdown of how some of the money from Mrs Alison-Madueke was allegedly shared.

The rest are: Director of the State Security Services (SSS) and his men (N2,5million), military officers (N50million), other security agents (including the Nigerian Security and Civil Defence Corps and the Federal Road Safety Corps (FRSC) (N20million).

In the charge, EFCC accused Belgore and Suleiman of conspiring to make cash payment of N450million, which exceeded the amount authorised by law, without going through a financial institution.

They were also accused of making cash payment of N450million to one Sheriff Shagaya without going through a financial institution.

The alleged offence, to which the defendants pleaded not guilty, contravened sections 1 (a), 16 (d) and 18 (a) of the Money Laundering (Prohibition) (Amendment) Act 2012 and punishable under Section 16 (2) (b). The trial will continue on November 13 and 14.

Continue Reading
You may also like...
Related Topics:diezani, efcc, loot