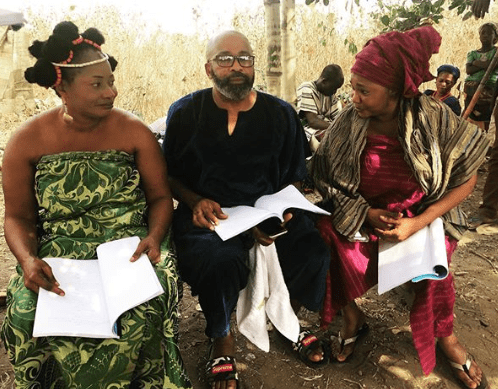 The movie will hit the cinemas on January 31 next year. Efunsetan Aniwura was a legendary Iyalode of Ibadan (woman leader) who reigned over a century ago.

Holder’s production outfit, Eropreston Ventures Production, produced the film. This was contained in a release personally signed by the talented thespian over the weekend.

“Like they say, if you want to shine like a sun, first burns like a sun. That’s the story of the second Iyalode of Ibadan,” Holder said of the new movie adding that she had to go and meet a couple of surviving members of the family of the famous woman leader so she could get first-hand information and accurate account of the woman’s life and times.

She stated that the “provocative new historic movie shot in locations in Ibadan and Ilesha discovers the long buried history of the Yoruba’s most powerful woman that ever lived; it is perhaps one of the most motivating thrillers in Yoruba political history. It captivates, in the most astounding manner like never seen in any movie in history all the sets built on the locations.”

Efunsetan was a business woman who travelled round the country to buy products like bitter kola, kolanut, cocoa, etc, she was well known among the Hausa and the western states.

She gave out gift and money to her slaves without measure. And even conducted marriages and naming ceremonies for them, but all these stopped after the death of her only daughter at a very young age, whilst in labour. Efunsetan was a woman of great principle. She was also beautiful, wealthy and proud, which led to her fall.

Speaking further, Holder said: “I am releasing two movies back to back in 2020 and definitely another one to watch after Efunsetan Aniwura is The Cocktale.”