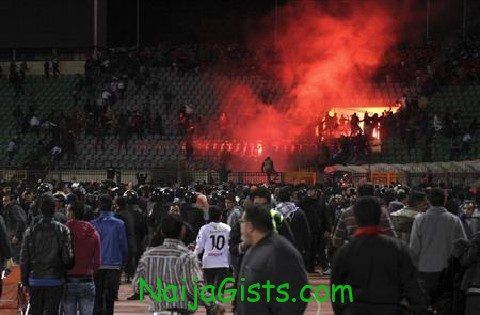 At least 73 soccer fans have been reported killed in Wednesday’s soccer violence in Egypt. naijagists.com

The melee broke out after fans of Al-Masry, the home team in Port Said, stormed the field after a rare 3-1 win against Al-Ahly, Egypt’s top team. Al-Masry supporters hurled sticks and stones as they chased players and fans from the rival team, who ran toward the exits to escape, according to witnesses.

Hesham Sheiha, a health ministry official, told state TV, most of the death were caused by concussions, deep cuts to the heads and suffocation from the stampede.