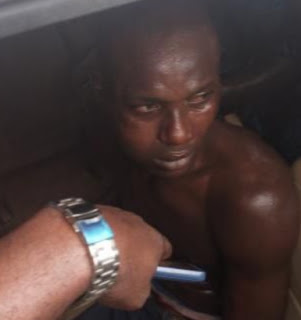 The serial rapist terrorising residents of Omojoda and Adamo communities in Ikorodu area of Lagos has been re-arrested after close to one year on the run.

The suspect identified as Segun Ogundeji aka Mago reportedly raped 3 young girls for ritual purpose in May of last year and fled.

He was caught after he reportedly sneaked into Omojoda last week.

The suspect who reportedly fled from police custody after his first arrest last year allegedly raped his victims and also cleaned their private parts with a charm-laced white handkerchief meant for ritual purpose.

At a point he brought 4 of his gang members to rob Ikorodu residents.

He was caught last Tuesday while playing football with some boys in Omojoda area of Ikorodu.

His case has been transferred to SARS in Ikeja.