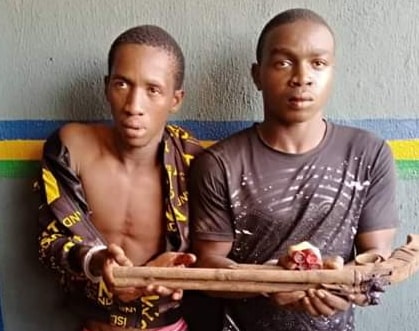 2  suspected members of the dreaded Eiye cult group have been arrested over the assassination of a member of the Oodua People Congress in Ogun state.

The deceased Kolawole Ajomale was shot dead in front of his pregnant wife at their home  in Oke Sopein area of Ijebu Igbo Ogun state on the 5th of April 2020.

The suspects identified as Jide Afolabi and Korde Pariosho reportedly shot Ajomale in the stomach and on the head. He reportedly died on the spot.

The duo arrested on Tuesday have confessed to the crime.

They claimed to have done so in revenge for the death of their member who was killed by some OPC men in 2017.