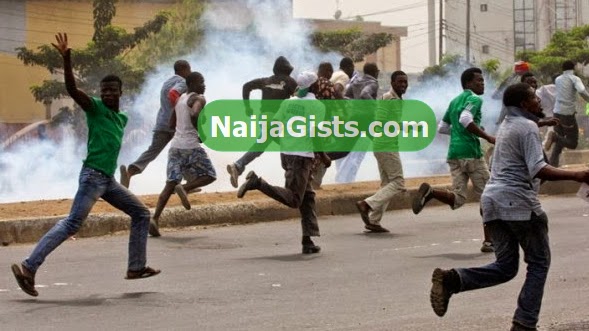 A young man has died in Somolu area of Lagos state due to cultism.

The 18-year-old boy identified as Sunday was killed on Onajimi Street in Somolu on Friday after a brutal attack on him by the members of the dreaded Eiye Confraternity cult group.

Those who killed Sunday were said to be members of the Eiye Confraternity group..

A source, who was at the scene of the incident, said, “It happened on Friday afternoon. Sunday had been away from the area for sometime because he feared he would be killed by the men. His mother had also told him to stay away.

“But on Friday, he suddenly showed up on a visit to his parents. He was first at Oyeyemi Street, where he drank with some of his friends.

“In the afternoon, he went to his mum’s shop at Onajimi, where she was selling noodles.

“He was eating noodles when a member of the Eiye gang spotted him, and came around with some other members.

“While the others were in hiding, he came to take a second look at him to be sure he was their target. He then signaled to the rest to come out of their hiding.”

Another source said, “The men, numbering seven, grabbed the teenager and shot him twice in the chest, hacked him with cutlasses, broke a bottle and slashed him from the armpit down to his stomach. When they saw he was still breathing, they strangled him.”

They dropped his corpse there and began vandalising the property.

The Aiye cultists on a revenge mission warned the tenants to vacate the property because they would return to burn it down.