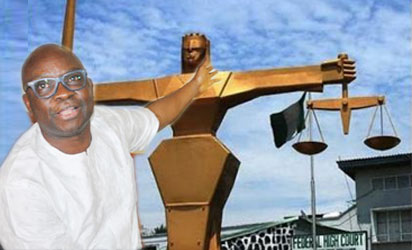 The All Progressives Congress (APC) in Ekiti State has responded to Governor Ayodele Fayose’s allegations in his press conference in Lagos purporting that APC was planning to illegally use the Supreme Court to upturn his mandate in favour of the party.

The party accused the governor of blackmail, saying his fraudulent and pre-emptive tactics will not stop justice from taking its course in the resolution of the biggest electoral fraud in the history of Nigeria.

Publicity Secretary of APC, Taiwo Olatunbosun, said in a statement that Fayose’s alleged fraudulent attempt to draw the support of the international community to poll fraud was an impish attempt to legitimise fraud, stressing that the same international community had since realized that world leaders were also victims of Fayose and Peoples Democratic Party’s (PDP’s) fraud by misleading them in Fayose’s electoral victory in Ekiti State.

“Even though the international community declared that Ekiti poll that produced Fayose was fair, the same world leaders have since changed their position after listening to Ekiti poll fraud tape as secretly recorded by Captain Sagir Koli detailing how Fayose and PDP leaders rigged the election, including Fayose himself talking in the tape on how he collected INEC soft copies and got them printed to win the election,” Olatunbosun explained.

He added that the governor was running away from his shadow after failed bids to beg President Muhammadu Buhari who he abuses daily.

“Why did Fayose try to pressurize members of the Military Panel to rescue him? After his emissaries returned empty-handed in their failed bids to achieve their aims, Fayose has now resorted to blackmail, accusing the President of trying to destroy democracy and we wonder who among him and the President is the enemy of democracy.

He said Fayose should explain to Nigerians and the international community what he meant in the Ekiti poll fraud tape where he said he collected INEC soft copies that he printed to win his election.

He said: “Besides declaring in the tape that he collected INEC soft copies that he printed, Fayose also said in the tape that a collation was done days before the election in Efon-Alaye and we want to ask whether Efon-Alaye was the collation centre for Ekiti governorship election and whether it is not a fraud to collate the result of an election that had not been held.

“If a criminal case that is taken to court and the court assumes jurisdiction to try that criminal case is what Fayose would call illegality and destruction of democracy, is it printing INEC soft copies and collation of results days to the election that is legal and a boost to the practice of democracy in Nigeria?”

The party said no amount of crocodile tears shed from one television house to the other and blackmail of the ruling party would make him escape justice in the resolution of Ekiti State election fraud.