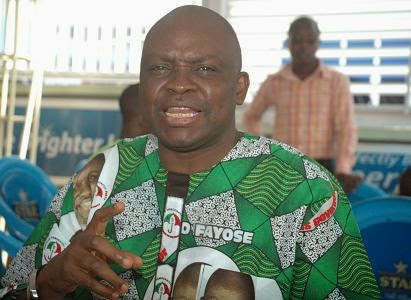 During his election campaign, he promised to give his people free food without condition but after election, the story has changed.

This is the exact situation in Ekiti state today.

Governor Fayose kicked start his Stomach infrastructure program last week but indigenes were told to pay 1000 naira each to qualify for the Christmas gift.

According to Ekiti Truth Vanguard, to receive a 2-month old chicken, indigenes were told to pay 300 naira, for a bottle of oil, N200, 2 Kongos of rice, N200 and registration form, N230.

Anyone without the N1000 can’t qualify for Governor Fayose’s stomach infrastructure plan.

Why didn’t he highlight this during his campaign, Naija politicians too dey lie…haba!