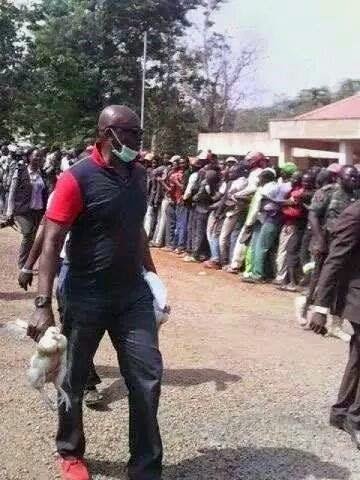 It was an interesting sight yesterday as primary and secondary school teachers from all over Ekiti State converged on Agric Olope area of Ado-Ekiti to collect the chickens that Governor Ayodele Fayose promised them for Christmas.

As early as 9am, teachers had started to throng the distribution venue to collect their chickens. When Governor Fayose arrived with a deluge of security aides in his traditional short-sleeve T-shirt, he threw victory punch to the air with the supporters he brought in buses responding with shouts of Oshoko.

The whole stretch of Agric Olope of Ajilosun was jam-packed with the vehicles of the teachers that came from all over the state. The other end of Agric Olope by Matthew Street was a no-go area as teachers, who parked their cars far away from the distribution venue, trekked long distances.

By noon, the picture of what would emerge at the end of the day had started to take shape as teachers went home with pigeon-size chickens cursing the governor in unprintable words. Some left in annoyance shouting “Sai Buhari, Sai Buhari”. 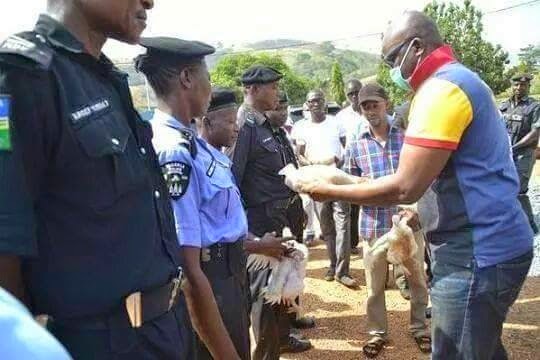 When the governor saw the anger of the teachers as they shoved and shoved in an uncontrollable scramble to collect their chickens, he offered to decentralize the distribution, but the teachers had already lost their patience, as they left in anger.

One teacher from Omuo-Ekiti lamented that he had spent about N800 to travel to Ado-Ekiti to collect a chicken that sells for less than N1000. One of the friends of a teacher who parked his car about 400 metres away from the venue with a green Nissan Primera lamented ever wasting his time “for this nonsense”. The man was more angry as the car of his friend broke down with bad brake cable where they parked. As at 6:30pm, mechanics were still battling to bring the car to life. 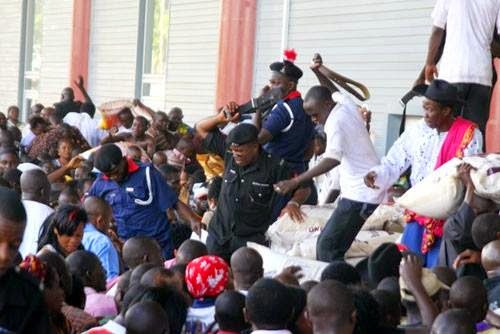 Surrounded by four other teachers, one of them said that he knew the whole exercise would be a fluke immediately he learnt that teachers in both primary and secondary schools were lumped together for the exercise.

“I know it is going to be like this. More than half of the teachers won’t get the fowls. Elomirin a kari so dele loni leyin ugba kaan ba ruun kankan gba leyin kaan duro titi titi ninu orirun (some people will go dejected back home empty-handed after waiting long hours in the sun).

As teachers moved enmasse in anger from the place, the governor pleaded that they should come back, promising that he would add N2 million to be shared among the teachers. This angered the teachers the more, as they started shouting:”How much will one teacher get if N2m is shared among more than 18,000 teachers in both primary and secondary schools?”

As The Trumpeter tried to take the photographs of the teachers as they were leaving in anger, some covered their faces to avoid being photographed.

To everybody’s chagrin, Fayose on his way to the office abruptly stopped at Matthew street junction along Ajilsun and sat at a phone vendor booth making phone calls while traffic built up heavily along the road.

[Reported By The Trumpeter]