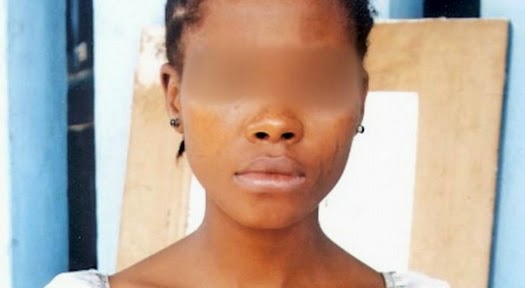 Pictured above is Uche Agunta, a 23-year-old lady that did far bigger things and more daring adventures than can be attributed to her age.

Today, the young lady is a tragic guest of the Imo State Police Command. She is held be­cause she is a point woman of a syndi­cate that specialises in hunting for male organs for money ritual. She did not deny the central role she and her other female members play of the ring. In fact, as she admitted, her method is to lure men into sexual act and at the height of ecstasy, she would sneak out razor blade and cut off her partner’s manhood.

Also, by her admission, she had har­vested about seven male private parts be­fore the long arm of the law caught up with her. All of these bizarre incidents, she said, happened in an Owerri hotel. But this fate­ful day, mother-luck went on a long jour­ney and she was left to face nemesis. She had, as she was used to doing, seduced this 38-year-old man (name withheld) and the man took her to the same hotel in Owerri. While they were having sex – in the heat of passion – according to her, she brought out a razor-blade and started cutting the man savagely. But the victim was quick to scream, raising the alarm. Otherwise, she would have succeeded in cutting off his manhood – as in her previous escapades.

The suspect, Uche, told her story: “I am a prostitute and I smoke. I have a gang and we specialise in sleeping with men and cut­ting their manhood during sex. We use the manhood for money rituals. I have killed seven men in the hotel in Owerri. They had sex with me after they have paid me N3, 000 or N5, 000. I would be on top of the man and in the process I would bring out blade and cut off his manhood”.

“I do hand over the manhood to our gang leader. They always promise to pay us N150, 000 for each manhood we could sup­ply, and which they used for money ritual.”

Uche, who hails from Mbaitoli Local Government Area, said she is a secondary school dropout. “I dropped out at JSS 3. I stopped going to school when I lost my fa­ther, but my mother is still alive. I joined a gang where some ladies initiated me into a cult. Our main concern is going after male organ for ritual.”

And their main strategy is doing that through prostitution. Uche said she has had three births and that she has sold two of the children. “I have given birth to three children. I sold the first and second children for N200, 000 each. The third child is a boy and he is staying with my mother”, she said.

She said she met her last victim last month, which now seems to have ended her sordid career. She told Saturday Sun: “On November 2014, the man met me at Oyima Street, Owerri. He gave me N2,000 to have sex with me. It was around 3.00pm. The victim took me to the hotel in Owerri and he was having sex with me.”

“I was on top of him and when he was enjoying it, I brought out my blade and I started cutting his manhood. But it hadn’t cut off when he started to shout for help. Then they came to arrest me and he was rushed to the hospital. I was arrested and I have confessed to the police.”

The Imo State Commissioner of Police, Mr. Abdulmajid Ali confirmed to this pa­per that the suspect, with her syndicate, is a prostitution ring. He confirmed that when they take a man to the hotel, the aim would be to cut off his manhood, and that they car­ry out the act when the man is at the peak of ecstasy during sex.

He stated that the suspect, Uche, had confessed to the police that the syndicate had killed over seven men in the hotel. “She said they have cut the manhood of the men and used them for rituals to enable them to have money,” Ali explained.

The police boss stated that luck ran against the suspect when she wanted to cut off the manhood of her eighth victim in an Owerri hotel. “The young man was hav­ing sex with her and she brought out the blade and was about cutting off his man­hood, but immediately the victim’s man­hood was about to be cut, he shouted and this prompted the security men and police­men to arrest her in the hotel and the victim was rushed to the hospital,” said the CP.

Ali said the officer in charge of surveil­lance, Supol Imo Ignatius, with his team, arrested the lady and that she is now at the Anti-kidnapper custody.

Incidentally, the victim happens to be an Anti-kidnapper officer. He told Saturday Sun: “I took the suspect to the hotel and I paid her N2, 000 for sex. The suspect was on top of me and suddenly she brought out a blade and almost cut off my manhood. Blood was gushing out and I started shout­ing, then the hotel staff came in and the po­lice arrested her.

“I was rushed to a nearby hospital for treatment. I am still receiving treatment. I thank God. My manhood could have been cut off; it remained just a little.”

CP Ali said that the police are still after the other members of the syndicate and that the suspect will soon be charged to court. He, therefore, warned those who are in the habit of carrying strange women for sex to be careful, noting that these days, some young girls do the most unthinkable things for money.