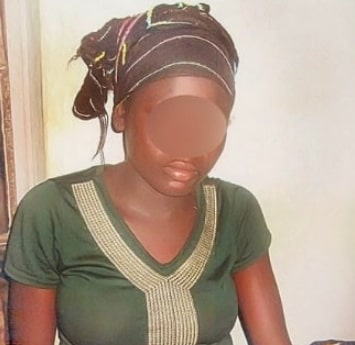 Sherifat Idris, EKSU Student Kidnapped In Atikankan Ado Ekiti Recounts Ordeal “I Lost My Consciousness After They Hit Me With Charm”

A first year student of  the Ekiti State University, Ado Ekiti has been rescued from some suspected kidnappers around Atikankan area of Ado Ekiti.

Sherifat Idris of the department of Physics, Faculty of Science was rescued yesterday by the Vigilante Group of Nigeria, under the leadership of Akin Olouloni through a tip off by a member of the public.

It was gathered that a passer-by who saw the alleged kidnappers while whisking away the victim quickly alerted members of the vigilance group at Ogbonado office in the state capital.

The quick response of the paramilitary officers to the situation led to the rescue of the lady with the abductors escaped.

Speaking The Nation the state commander of the vigilance group, Akin Olounloni said they swung into action with a tip off which invariably assisted them to trail the kidnappers.

Olounloni noted that the suspects would have been arrested but some people of Atikankan community had alerted them about their surveillance.

The victim who later regained her consciousness narrated her ordeal that she had come to the Oja Oba market for shopping before she was abducted by the criminals.

She thanked the men of the vigilance group for her rescue, saying if not for their timely intervention she wouldn’t have regained freedom.