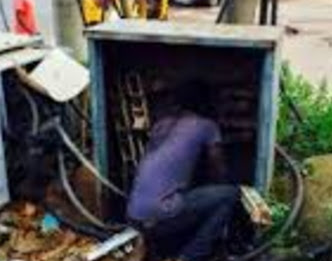 Jamilu Adamu, a 35-year-old Electrician died of electrocution today at Kawon Maigari in Hotoro area of Kano while trying to steal bushings and armored cable from a public transformer.

The suspect was found stone dead with a flat spanner and different rings in his possession.

While police were evacuating his corpse, one of the transformer’s High Voltage Bushings was loosened from the base.

An eyewitness said the deceased has been loitering around the area 3 days earlier. When he was approached, he reportedly said he was there to see a relative.