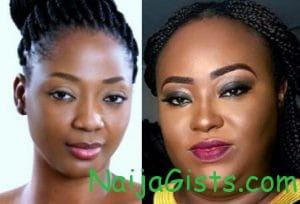 ‘A Milllion Baby’ Movie? what influenced the storyline?

The storyline is actually a partial story of someone I know. We were chatting and he was narrated his experience of one of his trip from Epe.

On his way, his car had mechanical issues, and where he got stranded; there was no way he could get cab, but ended up getting on a bus; which lead him to different characters on the trip. That was how the story came up and I added some other ideas to it to make it a whole packaged.

What was it like putting together top shots for the movie?

It was not that difficult putting these people together. This is what they do as professionals and they were open to business.

What we did was to get in touch with them, which was mostly done by my co-producer. But we had challenge with timing; most of them had different schedule and it was challenging having to fix the time that was convenient for each person for them to be together for a particular scene.

What movie brought you into limelight?

I would say the ‘Courier’; it’s been showing on TV stations, online, cinemas and other platforms.

That movie actually gave me away, because even now that I want to have my corn and enjoy which happens to be my favourite. I just realised that someone is recognizing me. Even when I go to the market to get items, someone will definitely walk up to me. The kind of responses I have been getting is quite heartwarming and encouraging.

The last one was in Oshodi; I went there to get some materials for an event. I am also into event planning. The experience was so crazy; people started walking up to me to ask questions like ‘Why did you carry the drugs with pregnancy’?, it was quite an experience trying to convince them it was all make believe.

What are the challenges of being a producer?

This are known challenges; finance is the topmost faced by producers. Then comes the production stage, post production and also getting the right cast for the movie.

Another is the box office; which entails you knowing the game to be able to beat them at it.

There is also the promotions for the movie; making awareness for your target audience, having used a huge amount to produce a movie, you need every publicity to make the movie get to where your audiences are.

But the utmost is the funds, because you need it for so many things; like running promotions for the movie before the release, after the release and also making it available for people to see. For me it’s the publicity, trying to create awareness for your products.

How long do you think you can withstand the test of time?

I would say in this industry, it is big enough for every talented act to explore daily.

Where ones talents ends, that’s where another begins. The good part is creativity is coming in daily for the industry to exploit. I can not say a particular person is the best, because as one movie comes out and people are talking about it and the cast, another comes out and take over the previous.

I am not bothered, because we need more talents for to emerge. That is because the sky is big enough for all birds to fly.

Tell us about your journey into the make believe world?

It all started in 2012, when I produced the movie ‘Moberu’, alongside the likes of Ayo Adesanya, Ayo Mogaji, and others. The movie was directed y Femi Ogedegbe. In 2013, I produced the Courier starring Ramsey Noah, myself, and some other notable actors; it was directed by Saidi Balogun. Also in 2015, I produced the movie ‘Caught Me If You Can’, co-produced with friend, who came out as an investor then. And then in 2016 I produced ‘A Million Baby’, co-produced by Lakunle. I shouldn’t be saying this, but he didn’t want to come out, but he didn’t have a choice this time around.

I came out through Emem Isong, I am into event planning and I also have a salon opposite her office. I was in the University of Lagos then and I met her through a friend. After the meeting I told her I was into catering also and she told me she was going to be on set with some top notch actors like Genevieve, Segun Arinze and others.

That was how I got on set as a welfare manager and from then I fell in love with her as a female producer’ I worked with her for three years back to back. That how my love for movie production started, I approached her about my interest in movie production and she gave me some advices on script writing and other useful information.