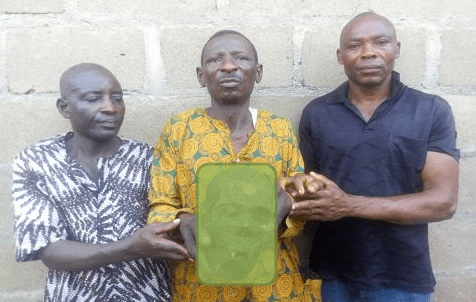 3 suspected ritualists have told the police that their native doctor asked them to get the skulls of people they know for rituals.

Sunday Mathew (52), Samuel Olaniyi (65) and Uchenna Olewunne (49) were arrested with a human skull on July 6, 2019, at Iju, near Ota, Ogun State by operatives of the Inspector General of Police Intelligence Response Team (IRT).

They claimed, during interrogation, that the native doctor told them they must know the name of anyone whose skulls they would be using, and members of his family, among other information.’’

They paid the native doctor N45,000 which he used to prepare a special concoction with the human head.

Sources said they have given the names of other members of their syndicate to their interrogators.

It was also gathered that the suspects on July 9 took detectives to the family of one of the deceased whose body they exhumed.

The deceased was identified by his family as Idowu Jimoh, who died at the age of 19 on November 15, 2018 following a brief illness and was buried behind his family house.

One of the suspects, Samuel Olaniyi, is said to be related to the family of Idowu Jimoh.

Matthew who claimed to be a farmer from Ipokia , Ogun State said it was his first time of participating in exhuming human remains for rituals.

The father of three said:

“I am living with this man (Olaniyi Samuel) in the said family house Obere, after Iju.

“I know Uchenna Olewunne. Uchenna is an herbalist and I used to scout for customers with different personal problems for him.

“At a point, my work was not moving fine and I discussed this hard life of mine with Uchenna. I told Uchenna that I was tired of living from hand to mouth, that I wanted to free myself from the chains of abject poverty.

“He said it would cost me just one human head and must be the head of a person known to me in order for the money making charm to be effective and produce the needed millions of naira.

“I told Samuel what Uchenna told me and we met Uchenna again who promised that he would take us to another native doctor who specializes in money rituals at Owode (in Yewa South Local Government Area of Ogun State).

“The native doctor accepted to do it on the condition that we must bring the human head with correct name and other important details. He told us not to be afraid as he had rescued several human head merchants caught by the police in the past.

“In the night of that fateful day, at about 11:00 pm Uchenna came to the family house and we told him that the human head was in a family house. Samuel exhumed the skull while I kept watch to see that nobody was watching us.

“When we took the human head to the native doctor, the man said there were other things needed to prepare the concoction and that it would cost N48,000.

“However, the native doctor asked us to come back the following day with charcoal to burn the skull to make the concoction. Unfortunately, operatives of IRT arrested us on our way to get the charcoal.’’

“Matthew lived with me in my one room apartment. Matthew told me about the deal because I had the details of the boy whose skull we wanted to dig out from the grave at his family house.

“The deceased was my relative but I didn’t attend his burial. My role was to bring out the skull while Uchenna’s role was to dig the grave.

‘’My regret is that I didn’t get a dime after the whole exercise. I am still a poor man. The devil deceived us.

Uchenna, the native doctor, denied being a ritualist.

He claimed to be only a specialist in curing ailments.

”I am a native doctor, but I am not into rituals. I only cure stomach trouble, venereal diseases, impotency, fever, acute malaria, and fibroid, among others.

“This is my first time of getting involved in money rituals. They came to me and brought the issue of money ritual and I told them the babalawo (native doctor) that could do it for them. I didn’t want to become a millionaire. I didn’t follow them to the grave. They lied against me. I only took them to a native doctor.”

Continue Reading
You may also like...
Related Topics:family, members, Ritualists, use