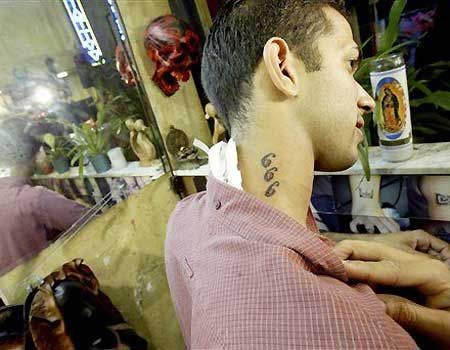 A group of happy and well-dressed church members surrounded by a mob of news cameras crowded into a South Beach storefront parlor on a recent muggy evening and got matching tattoos of their prophet’s symbol: 666. naijagists.com 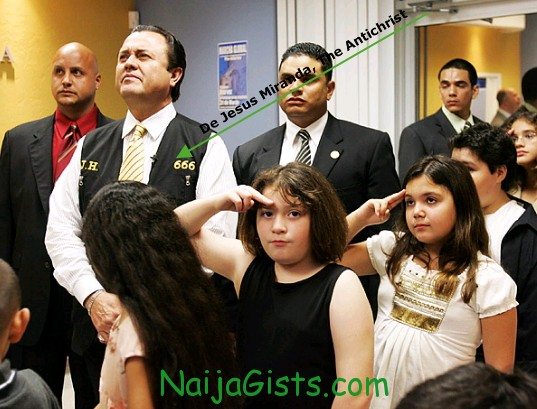 De Jesus miranda the antichrist and his followers

The members of a very controversial religious sect located in Doral said they were following the example of their leader, Jose Luis De Jesus Miranda, who has claimed to be Jesus and recently declared himself the Antichrist.

Critics have called De Jesus a cult leader who manipulates followers. Church members say he has brought them happiness and spiritual fulfillment.

“This is backing up what I truly believe,” said Alvaro Albarracin, 38, who heads a film production company and joined the church more than a decade ago. He showed a bandage that covered the freshly tattooed “666? on his forearm. “It’s like a brand. It’s like a sign.”

It’s a sign most Christians would shun, because for centuries the numbers have been associated with Satan. But for the 30 or so church members who branded themselves with 666 and SSS — the initials of De Jesus’ motto, “salvo siempre salvo,” or “saved always saved” — it’s a mark of their absolute faith in De Jesus.

Church members say the symbol doesn’t connect them to Satan but rather to De Jesus’ claim that he has replaced Christ’s teachings with a new gospel.

Scholars and critics of the movement say the tattoos offer frightening evidence of the influence De Jesus commands over his followers.

“What is he going to do next to call attention to himself?” asked Daniel Alvarez, an instructor in the department of religious studies at Florida International University who has studied the movement. “This means that his control over people is so great that no matter what he says to them, they’ll follow him.”

De Jesus was was not available to comment, said a church spokeswoman.
At the tattoo parlor, one woman wore a T-shirt with De Jesus’ picture and the phrase “The Lord Arrived” in Spanish. Others wore shirts and baseball caps marked with 666. Spanish rap music blared from a stereo in the back.
News cameras circled the tattoo chair as artist Jessica Segatto, wearing pink rubber gloves and a huge silver cross, carefully inked 666 on church members’ ankles, forearms, backs and one member’s neck. Some members said they decided to attend the tattooing session — which was prompted by a church announcement the previous week — to prove their commitment to De Jesus’ vision. Others said they hoped the symbol would provoke questions about the movement.

“I figured if I have it on my leg, people are going to notice it, 666, and they’re going to ask,” said church member and spokeswoman Axel Poessy.

De Jesus — who preaches that sin and the devil were destroyed when Jesus died on the cross and that God’s chosen already have been saved — has built a massive movement around his claim to divinity. Followers call him “Daddy” and “God” and lavish him with $5,000 Rolexes and sometimes 40 percent or more of their salaries.

Christian leaders have denounced De Jesus, saying he distorts the Bible. The Rev. Julio Perez of Nueva Esperanza, a faith-based community group in Hialeah, said De Jesus was promoting himself rather than helping members of his church. “What he’s doing is trying to create his own sect,” he said.
De Jesus had just a few hundred followers when he launched his church in a Hialeah warehouse about 20 years ago.

Today, he commands a global movement from his Doral headquarters that boasts 335 education centers, 200 pastors, 287 radio programs and a 24-hour Spanish-language TV network that’s available to 2 million homes — including by special request from some U.S. cable companies. Only De Jesus and his right hand man, Carlos Cestero, are authorized to preach.

In his sermons, De Jesus emphasizes wealth and success as a sign of God’s favor. Many of his members are business owners who give a percentage of their corporate profits to De Jesus, said Alvaro Albarracin, who oversees corporate donations to the church and holds the title “entrepreneur of entrepreneurs.” Albarracin, who runs the film production company MiamiLa Entertainment, said he gave 20 percent of his profit to the movement when he sold his Web-hosting company, Dialtone, for more than $16 million in 2001.

Martita Roca, 25, a South Florida singer and actress from Guatemala, said she sometimes gives 40 percent of her salary to Growing in Grace. Giving a piece of her flesh by getting a tattoo was another way to prove her commitment, she said.

“For all of those people who pray for us to come out of this movement, this shows that this is it, there’s no going back,” Roca said of her tattoos. “This is to make sure that everyone relates me to that vision.”
Luz Fuentes, 51, a former Catholic who joined Growing in Grace in 1990, said she and her brother give Growing in Grace up to 50 percent of profits from their Hallandale mortgage company, Apos Mortgage. “Apos” is short for “apostle,” one of De Jesus’ monikers. De Jesus is listed on the company’s website as its CEO.

“Antichrist” is the latest in a string of titles De Jesus has bestowed on himself.

In 1988, De Jesus announced he was the reincarnation of the Apostle Paul. In 1999, he dubbed himself “the Other,” a spiritual superbeing who would pave the way for Christ’s second coming. In 2004, he proclaimed himself to be Jesus Christ. That claim caused some prominent members to defect from the movement — including De Jesus’ first wife, Nydia, and his son Jose Luis Jr., who started his own church in Puerto Rico.

In January, during a packed worship service at the church, De Jesus took off his coat and revealed the numbers 666 on his forearm.

“This is a congregation of Antichrists,” De Jesus said, drawing whistles and cheers.

The number 666 appears in the Book of Revelation, a portion of the New Testament that details the prophet John’s apocalyptic vision of the rise of the Antichrist, the tribulation and Christ’s return. In Revelation, a horned beast appears on earth and requires everyone to get his mark — 666 — on the right hand or forehead.

Experts on new religious movements say De Jesus’ opposition to other religions, and his claim to be the only legitimate spiritual authority, resemble the teachings of some cults.

“It’s clearly a personality-driven group,” said Rick Ross, an anti-cult consultant based in New Jersey. “It is defined by the claims of De Jesus Miranda.”

Nick Woodbury, director of the evangelical group Christ for Miami, said most mainstream Christians would reject Growing in Grace’s teachings as unbiblical.

“In the Christian evangelical sector, we would consider them a sect,” said Woodbury, who has served as a missionary in Colombia with the Mimai-based group Latin America Mission. “They take the Bible, but their interpretation is very warped.”

De Jesus’ followers have lashed out against organized Christianity because they believe their prophet holds the true gospel, they say. His adherents have disrupted Catholic processions on Good Friday and protested outside an evangelical church gathering in Miami’s Tropical Park. Last July, they tore up literature published by the Jehovah’s Witnesses and other Christian movements during a march in downtown Miami.

Scholars who are concerned about the movement’s growth say they hope De Jesus’ latest claim will insert doubt into the mind of some members.

“The symbol of the Antichrist is so negative, the only good thing that will come out of this is that people will say, ‘Hold on, this man is going off the deep end,”‘ FIU’s Alvarez said. (Source: Fox News)