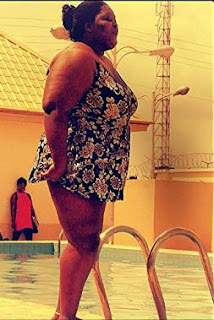 Up until now, we are all used to her jovial and playful side not until some fans started abusing her over her weight battle on Twitter.

Shdl i commit suicide cos am big? or d plus sized ar not wanted in d society…. am sure ur plus sized friend wanna b like ENIOLA BADMUS.

Am sure my stature is a big problem 2 some of u but d fact is that am happy being big and beautiful so y use panadol 4 my headache.

Please guys let’s be kind… Personal abuse is not nice… just put her in your own shoes.

This is the same lady that put smiles on our faces… Let’s be kind to her.