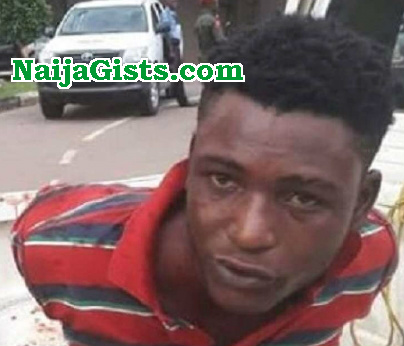 Enugu State Police Command says it has arrested an alleged burglary kingpin, named withheld, who has been on the trail of the police for over two weeks.

The command’s spokesman, Mr Ebere Amaraizu, made this known in an interview with NAN on Friday in Enugu.

He alleged that the suspect and his gang had been involved in most of the burglary incidents within Enugu Township.

The police image maker said that the police recovered from the gang, DVD, home theaters, cell-phones and laptops.

The Police Public Relations Officer (PPRO) explained that the police also recovered a hammer and a digger being used by members of the gang to break peoples’ homes.

Amaraizu noted that the alleged kingpin was spotted in Enugu and arrested by police detectives, following intelligent information on Thursday.

“Emmanuel has led his gang members to series of burglary within Enugu Township and its outskirts.
“They also invaded West-point Hostel in Mary Land Area of Enugu in the early hours of Oct. 16 and allegedly escaped to an unknown destination.

“Since then, police has been trailing him and his gang members,” the PPRO said.
Amaraizu said that the suspected criminal had been helping the police in its investigation, adding that the command had intensified efforts in its manhunt on the other gang members.

NAN recalls that there have been complaints of burglary in some remote and less populated areas of Enugu Township in recent time.

Continue Reading
You may also like...
Related Topics:enugu state most wanted robber