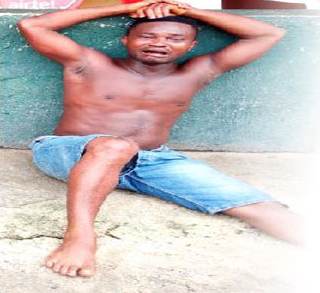 By Rosemary Nwisi, The Nation

IGP team over the weekend burst a notorious kidnap gang camp in Etche communities of River State and Ukwa area of Abia State.

The police operatives cracked the gang, led by one Uchenna Okere (a k a Togo), which engaged in kidnapping, armed robberies, cultism and killings.

The monitoring unit led by Ben Igwe, Assistant Commissioner of Police (ACP), also rescued a 17- year- old daughter of a traditional ruler in Etcheland, who had been in the criminals’ custody for more than two weeks.
The men also arrested a member of the gang and recovered arms and live bullets.

Speaking to our correspondent shortly after parading the suspects, Igwe said it was the first time security agencies would come to the rescue of the communities since the uprising of Togo and his notorious gang.

He expressed delight the exercise would bring about relative peace and security in Etched and its environs.

He said: “If you know the joy if the people over the raiding you will understand that they have been living in great fear of insecurity in the place.

“Following the outcry, we left for the community about 1am this morning (yesterday).

“When we located their hideout, he engaged the police to a gun battle but we overpowered them. They escaped and we went in to arrest one of them (Gift) and rescued the victim and recovers two guns and ammunition”

He however vowed that the unit will not rest on its oars until Togo and other members of his gang are apprehended and peace restored to the area.

“It is not yet over. We will continue to comb the area until the kingpin and his members are arrested.

“They have run away but relative peace has returned to the communities around there as well as every part of Ukwa area of Abia state where he held way.

“He is referred to there as governor and harvests levies from all the markets in that axis on each market day.

“We must make sure that his illegal reign in the area comes to an end and people there are liberated,” Igwe stressed.

One of the suspects, Gift Nnodim, said: “I am from Umuokom Etche. I am 21 years old. I live at Umuokiri Aluu in Ikwerre Local Government Area of the state. I am training in welding.” He denied having anything to do with the notorious gang leader, Togo aside from being a kinsman.

“If my phone was here, you would have dialed Togo’s mobile and confirm whether or not it is stored in my phone. At least if I have any dealings with him, his number will be on my phone,” he stated.

Another suspect, Chidiadi James, 22, a barber, said he was arrested without being told his offence.

Narrating her ordeals in the hands of her abductors, the victim said she was beaten, tied up and left in the custody of armed men but said she was not sexually violated.

According to her: “I was coming back from school when they accosted me with a motor bike and took me away to far away village from where I was kidnapped.

“There were 15 of them. They were taking me from one house to the other, one village to another. They did not take me to their camp in the forest but one of them pointed to me the direction of their camp.

“When we got to the first house, they asked me to release the contact number of my father I told them I am an orphan. They now said then you will be here and be cooking for them.”

Asked if all she was doing in the over two weeks she was with them was to cook, she said she was not untied anyway to cook.

“I was beaten severally, blindfolded at some point and threatened with death. Some of the boys also threatened to rape me.

“This sparked heated argument among them that they almost fought each other but they later did not touch me,” she said.