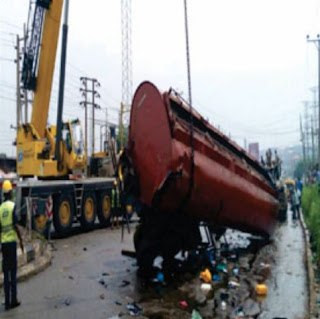 3 men scooping vegetable oil from a fallen tanker were yesterday killed at Odogunyan area of Ikorodu Lagos when the tanker’s head suddenly turned and crushed them to death.

According to a witness, a woman scooping fuel was badly injured by the tanker.

Here is how a witness said about the incident that happened in the early hours of Saturday:

“A tanker that was carrying vegetable oil fell at Odogunyan. Its head was detached from its body but the tanker was still standing.

“When people saw it, they thought it was carrying fuel or diesel and they rushed it. But they discovered it was vegetable oil and were still scooping when the tanker fell on them.

“Three men were killed on the spot. A woman’s leg was almost cut. She was in critical condition and another man also sustained serious injuries.

They were rushed to the hospital. I do not know their names.