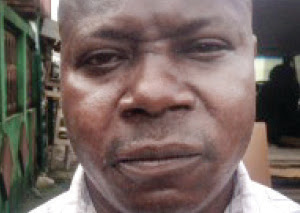 A survivor of the Onitsha tanker fire disaster has narrated how he miraculously escaped from the scene of the inferno. He warned people who scoop fuel from accident scenes to desist from the act.

Emeka Kanife, an evangelist, could have been in the number that lost their lives on May 30, 2015, when the petrol tanker conveying fuel upturned at Asaba Park at Upper Iweka and subsequently caught fire. The fire roasted no fewer than 70 people, leaving scores badly burnt. The fire also destroyed many commercial buses and motorcycles and left the lives of some survivors in ruins.

Kanife, who was at the scene of the accident, said he witnessed people wailing and weeping as they were being burnt to death.

He recalled that he was very close to the huge ball of fire that engulfed the area in a matter of seconds and by the time he turned to see what was going on behind him, all he saw was confusion and pandemonium. He cringed as he recalled seeing and hearing people struggling and screaming as the inferno ceaselessly tormented them, stating that it was a true hellish experience.

Kanife said God had forewarned him through his fellow evangelist that he was going to experience a disaster but he didn’t know what form it was going to be. He said if he had not listened to the voice of God, he could have been caught in the inferno and nothing could have freed him from the deadly fire.

“I travelled to Anambra State on Friday, May 29, just two days before the disaster struck,” Kanife who hails from Ezeagu in Enugu State said. “I had this prayer appointment with a Catholic priest in Nnewi. We were to hold a vigil in his parish and from there, we would go with his team to my home for a family liberation prayer.

“On that fateful Friday, I rose early in the morning and headed for Cele Bus stop at Okota, Lagos to board a bus bound for Onitsha. Soon after purchasing my bus ticket that morning, I was scouring the area for a seat when I received a call from a fellow evangelist, demanding to know where I was. ‘Where are you Bro Emeka?’ he asked. I told him I was already on my way to Onitsha; that I was at the bus park waiting to board.

“Instantly, he told me that God warned him about an impending disaster, insisting that the trip be cancelled. Surprised at his warning, I told him that I was going to keep an appointment that had long been scheduled. Actually, I was going to connect a team in Nnewi. We were to attend a prayer session in my hometown in Enugu State.

Hearing my explanation, he was not pleased one bit. Instantly, he demanded that I summarily withdraw my ticket.

“Breathing down heavily, I knew I had no chance of continuing with the journey. So, I went to the ticket counter and asked for a refund from the clerk. Surprised at my demand, she gave me back N3,000 instead of the N3,500 I paid.

“Taking a few paces away, I rang my colleague to explain to him how much so many people on whose behalf the prayer session would be organised would be devastated if I failed to make the trip. I explained to him how everything had been organised long before then and how all the parties who were going to be part of the spiritual exercise would be left stranded. I also told him about my role in the whole arrangement and that I would be the point man of the team because none of them knew where we were to go to other than me. They didn’t know those they were going to meet and the people did not know them.

“After listening for a while, he promised to call me back in a short while and then switched off. When he called back, he commanded me to listen very carefully and I did. He told me emphatically that God said I should step aside to a quiet place, draw some earth and make the sign of the Cross three times on my forehead, each time saying ‘No instrument fashioned against me shall prosper!’ Then he charged me to go fort, promising to support me all the way in his prayers.

“Going to a quiet place where I was all alone, I did exactly what I was asked to do. When I returned, the chance for me to travel with the same bus whose ticket I had earlier paid for was still there. I simply handed the clerk N3,000. Looking at me with surprise, she gave me back the ticket.”

Kanife said as the bus edged out of the garage, he was a bit enveloped with fear but soon shrugged it off, allowing himself to be clothed with faith. He said once the bus hit the road, he burst out into songs of praises and in a short while, all the passengers joined in. From there, he said he praised and preached until the bus almost got to Ore in Ondo State.

It was nearly a whole day journey, he recalled. Everything went well and he had no cause to entertain any fears. He further recalled that he got to Onitsha without incident and from there, headed for Nnewi where he was warmly received by his guest.

Said he: “That night we held a vigil. We prayed like we had never done before. We witnessed miracles that surprised everyone; a couple of people who had been insane for long became sane again. It was great!

“At dawn, we set out in a convoy and headed for Enugu State. On getting to my village, we were well received. The business of the day was brief and everything went well. The prayer session over, the party left me and returned to Nnewi; so I had to stay back to rest and see my people.”

In the mid morning on Sunday, Kanife recalled how he set out to return to Lagos. He said first, he boarded a bus from his hometown to Onitsha. As usual the journey was without any incident. Then he got to Upper Iweka in the afternoon and the disastrous happened.

“The vehicle was in good condition and showed no signs of distress. I was to go to Asaba to keep an appointment also. After that, I was to pass the night and then set off the next morning.

“Just a pole to Asaba Park, our vehicle developed an inexplicable fault. I had this pull to alight and a few strides I would be inside the park, but I felt somewhat heavy. It was like something held me back. So I hesitated for a while. If I had alighted by the time others did, I would have been right inside the park or seated in one of the buses bound for Asaba.

“But by the time I eventually alighted, I looked forward and saw a fallen tanker ahead. People were rushing to it to scoop the substance spilling from it. It was like a gold rush. I could see a man in the distance – I presume he was the driver of the fallen tanker – warning people to stay away, but no one seemed to be listening.

“The moment I took a few steps towards the park, I heard a deafening explosion which sparked a gigantic ball of fire that quickly engulfed the area. That sparked off confusion and pandemonium which sent everyone running for their lives. People were wailing and weeping as the fire continued to blaze. Those who were caught in the inferno were running; but there was very little they could do. It was horrendous.

“With my very eyes, I saw charred remains of human beings. Passengers who were already seated in various buses in the park were all roasted. Buses, commercial motorcycles and their operators within the vicinity were all killed by the merciless fire. It was a gory sight.”