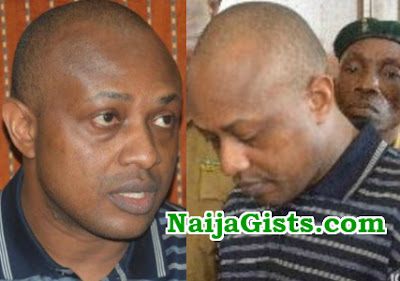 Billionaire kidnapper Chukwudumeme Onwuamadike aka Evans has denied allegations of kidnapping and demand of a $2 million ransom filed against him by the Lagos State Government.

Evans and his co-defendant Victor Nonso Aduba pleaded not guilty to a four count charge of conspiracy, kidnapping and unlawful possession of weapons.

The defendants were arraigned this morning after their application to quash the charge was dismmissed by Justice Oluwatoyin Taiwo.

The court ruled, among others, that there was sufficient ground for a prima facie case against Evans and second defendant Victor Nonso Aduba.

“I have read the proof of evidence. The court is the view of this court that there is sufficient reason to proceed. I find that this court has jurisdiction to try the charges. This application is subsequently dismissed.”

However, Evans’ counsel Olukoya Ogungbeje informed the court of his intention to test the decision at the Court of Appeal.

Ogungbeje also challenged the competence of an amended second charge of murder, attempted murder, kidnapping, among others, filed against Evans by the state.

Attorney-General and Commissioner for Justice Kazeem Adeniji informed the court that the change only affected a date on the seven-count charge.

Justice Taiwo stood down the matter for 40 minutes for ruling.

6 thoughts on “Evans Loses Court Case, Says He Is Not A Kidnapper”