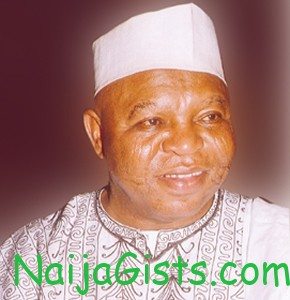 The attempted arrest of the former governor who is being tried for fraudulently enriching himself to the tune of over N4 billion while he was governor of Kogi State between 1999 and 2003, followed a Supreme Court ruling of November 23, 2012, which dismissed the ex-governor’s appeal to continue to protract his corruption trial by EFCC.

According to a statement signed by the Spokesman of the Commission, Wilson Uwujaren, the Supreme Court ruling therefore clears the way for his fresh arraignment before this narrow escaped.

It would be recalled that Audu was arrested in Jos in 2006 after a six months manhunt by operatives of the Commission, before his earlier arraignment at the Kogi state High Court on December 1, 2006, on an 80 criminal count charge of conspiracy, fraud, criminal breach of trust and embezzlement of public fund.

The EFCC had, while the case lasted at the high court, cause issuance of nolle prosequi by the former Attorney- General of Kogi state, Dr. John Alewo Agbonika and the Attorney General of the Federation, Chief Bayo Ojo on February 8, 2007 for the case to be discontinued at the Kogi State High Court as the Commission claimed to have lost faith in the handling of the matter by the State High Court.

“In my capacity as the AG of Kogi state in collaboration with the AG of the Federation and by virtue of the power vested in me by Section 211 of the Constitution of the Federal Republic of Nigeria 1999 and Section 253 of the CPC and all the powers enabling me in that behalf, I Dr. John Alewo Agbonika hereby inform this honourable court that I no longer intend to continue the prosecution of this case in collaboration with the AG of the Federation to whom I had given a fiat to prosecute this case”, Agbonika, the former Kogi State Attorney General said.

But rather than discontinue the matter in the spirit of the nolle prosequi, the trial judge, Justice Medupin, went ahead as he further referred two questions to the Court of Appeal for determination. In a judgement delivered by Justice Bode Rhodes-Vivour, the Supreme Court held that the Court of Appeal was wrong to consider the questions referred to it for determination after being aware from the records of Appeal that a nolle prosequi had been filed.

Part of the setback suffered by the Commission in the prosecution of the case was the filing of several applications by the defendant for stay of proceedings at the high court pending the final determination of the appeal. Audu had on December 12, 2011, through his lead counsel, Mike Ozekhome, SAN, filed the stay of proceedings motion supported by 11-paragraph Affidavit. This was 26 clear days after the Supreme Court of Nigeria on November 16, 2011, struck out a similar application he filed on January 24, 2011.