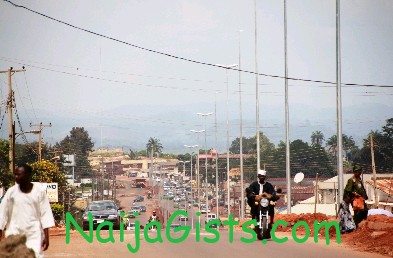 It was gathered that the herbalist had been abducted last Wednesday by the suspects while he was lodged at a guest house in Ikere Ekiti to prepare a charm for his client.

Asanu, who said he was based in Asaba, capital of Delta State said he was at the guest house when four men came there in a mini bus, adding that he was taken to an unknown place in their bus, and was manhandled.

Two of the suspects Alabi Olubodun, 28, and Ayokunle Ojo, the victim’s brother who also said he was an herbalist, claimed that they had a deal with the victim that went awry.

The Police Public Relations Officer, PPRO, of the Ekiti Police command, Mr. Victor Olu Babayemi, who confirmed the development on today said the police were alerted while the manager of a guest house in the town helped with useful information about the suspects.

Babayemi also confirmed that the gang was made of six members were accosted by the police at Ikere – Ijare Road, but explained that only four of the suspects were arrested by the police after a gun duel in the woods of Ikere as two of them escaped.

He said investigation had commenced in the matter and added that the suspects would be charged to court as soon as investigations were concluded.