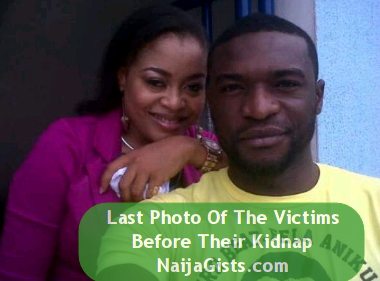 While we all hope for the safe release of our dear actress Nkiru Sylvanus who was kidnapped at gun point around a Nollywood movie location in Owerri, Imo state earlier this week, another shocking news has surfaced. naijagists.com

We learnt the former Mr Nigeria pageant winner, Kenneth Okolie was also kidnapped alongside the popular actress (an aide to Imo State Governor).

The two were present at a movie location before an argument that led to their sudden departure with an unidentified fellow making three of them.

We also gathered they were going to another movie location with Nkiru as the driver when they were attacked by masked gunmen who laid ambush for them around Concorde Hotel at Cathedral road in Owerri, Imo State Nigeria.

All the 3 people in Nkiru’s car were kidnapped on the spot.

Ex-Mr Nigeria Kenneth Okolie who is based in Lagos travelled to Imo state 14 days ago in order to feature in an upcoming Nollywood movie.

The kidnappers who made contact with Imo State Government for N100 million ransom for the release of actress Nkiru Sylvanus are yet to contact Kenneth Okolie‘s family in Lagos.

We hope for their safe return.