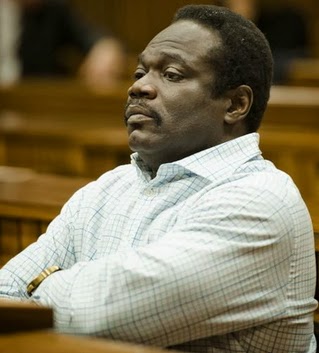 Convicted murderer, Ambrose Monye has been jailed for life in South Africa.

The ex-Nigerian Olympic athlete was sentenced to life imprisonment alongside Andre Gouws for killing Channelle Henning at the North Guateng High Court in Pretoria on Wednesday, Streetjournal reports. 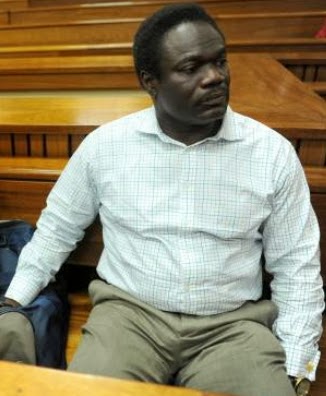 After several months of denial, the convicted killers confessed to th emurder of 26-year-old Henning.

She was killed on the 8th of November 2011 after dropping her baby at a day care center in Faerie Glen in East of Pretoria, South Africa. At that time, Channelle and her estranged husband, Nick Henning, had been locked in a custody battle.

The Nigerian Olympian said he is ashamed of his actions.

Back in 2011, Monye who represented Nigeria at the Seoul ’88 Olympics was acquitted of murder after he allegedly beat a man to death. The former athlete ran a security outfit, “Big Dog Security” but that was not enough to keep him off police radar for drug dealing. His lifestyle also drew attention. Though well built himself, the former athlete hardly ever went anywhere without his hefty bodyguards.

Authorities tried to investigate how he got his South African citizenship and if it was done legally. His ID number gives his age as 40, indicating that he represented Nigeria at the age of 14.

In Lagos, an athletics official who worked closely with Monye while he was representing Nigeria told The PUNCH that the convict did not represent Nigeria at the Olympics as is widely reported in South Africa.

He said, “He never made it to the Olympics with Nigeria. I know he ran the 400m for the country but that was at the All Africa Games. Right away I can’t give the exact one he participated in but he stopped at that level. I don’t know how the Olympics detail got into his CV.”

Judge Johan Kruger said Monye and Gouws were callous, cold-blooded killers who only confessed their guilt to Henning’s murder to save their own hides.

“The murder was executed on an unsuspecting young woman and mother of a young child who did neither of the two accused any harm, who was leading her own life and minding her own business, unaware that ill-intended men were planning to kill her.

“Murder is always utterly repugnant but the murder of Chanelle Henning remains an act beyond any reasonable comprehension.”