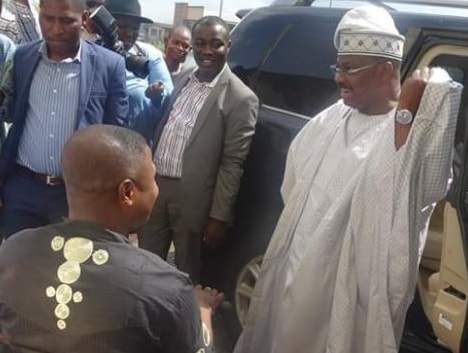 Executive thuggery in Nigeria has entered a phase. Departing from the conventional use of drugged miscreants and crude weapons, state governors are embracing the innovation of mechanized bullying. They now deploy bulldozers to the addresses of their real and imagined enemies.

The demolition of the 800 million naira Music House Ibadan, a crown jewel that also houses the thriving radio outfit, Fresh FM, by Governor Abiola Ajimobi, is part of an emergent culture of intolerant politics.

The official rationale that the Music House was erected in violation of town planning regulations is a mere excuse to justify the malicious demolition. The real reason why Ajimobi destroyed the Music House was that its owner had refused that it serve as the echoing medium of government propaganda. Ajimobi himself previously confessed that his aides had advised him to move against the station because it was transmitting inconvenient truths.

With this inexplicable demolition of a radio house, Ajimobi has cemented his notoriety for exaggerated interpretation of the powers of the governor and his contempt for free speech.

Last year, a group of LAUTECH students went to the governor’s office to protest against their eight months-long idleness on account of the protracted strike of the institution’s lecturers. They meant to dramatize the need for Ajimobi to intervene in the industrial dispute and facilitate the re-opening of the school for academic activities. He took the demonstration personally and talked down on the students like a snobbish emperor.

He told the students that they were an unruly and uncouth mob. They had not deigned to prostrate and tender their request respectfully to him, the ‘’constituted authority of Oyo State’’. He said they were ranting as if an eight month long closure of the university was unprecedented in the annals of Nigerian history.

Ajimobi views the powers of the governor as a tool to be used in service of his private whims. He is driven by the congenital impulse to destroy anything and anybody that he deems unfriendly. His resort to the bulldozer illustrates the architecture of his thought processes. His mental reflex is to fantasize about the collapse of anybody he considers a rival. His use of a bulldozer to destroy Music House represents an image of his dream capacity for destruction. He would have loved to be able to turn himself into bulldozer so that he would easily destroy his putative enemies by himself.

The destruction of Yinka Ayefele’s Music House irks in a special way because the singer built it with his sweat and talent. He worked hard for years to earn the money that he invested in the building. He didn’t steal to build it. He had never held a public office in his life. Nor has he ever been charged for fraud.

Ajimobi felt threatened by Ayefele’s Fresh FM because the broadcasting outfit would not to lend itself to the governor’s control. The radio station was rising in credibility and popularity as it presented news and views with classical journalistic independence. It scared Ajimobi that the radio station might shape voters’ decision in this election year.

The increasing attacks on journalists and journalism have a native context in the politicians’ attempt to dictate the narrative and corner favourable coverage in the run-up to the general elections. The media is powerful. The politicians are struggling to wrest power from the media so that the electorate won’t have an alternative to their single story.

The growing intolerance for free speech and press freedom by state actors should worry every sentient lover of democracy in Nigeria. It’s a bad omen that political bullies are having a field day at the expense of civil liberties. They are redrawing the borders of human rights as it were their preserve to define the permissible limits.

The global journalism watchdog, Reporters Without Borders, counts Nigeria as a country where journalism practice is under intense threat. In 2018, Nigeria ranked 119 out of 180 on its World Press Freedom Index. The organization remarked that ‘’In Nigeria, it is difficult to cover stories involving politics, terrorism, and financial embezzlement by the powerful. Journalists are often threatened, subjected to physical violence, or denied access to information by government officials…’’

The demolition of Music House bears witness that state governors are malevolent harassers of the press.

About the author: Emmanuel Ugwu writes from immaugwu@gmail.com

Yinka Ayefele Hospitalised Over Illegal Demolition Of Music House “My Wife Begged Ajimobi For 5 Hours..I Don’t Know My Offence”
Becca Married Her Nigerian Husband Because Of Money, Her Marriage Will Soon Crash – Critic