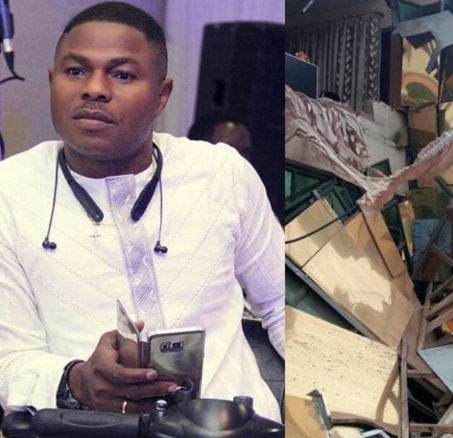 Gospel star Yinka Ayefele has said he was hospitalised for five days when he received the notice from Oyo State government to demolish Music House building housing his Fresh FM in Ibadan, the state capital.

The artiste said he was on hospital bed from August 14 till August 18.

Addressing reporters yesterday inside the partially demolished building, Ayefele said his wife was at the home of Governor Abiola Ajimobi around 11 p.m on August 18 till about 4 a.m on August 19, pleading with him not to demolish the building.

The singer, who was in company of top officials of the his radio station, said: “Immediately, I got this demolition notice last Monday, August 13, I started making moves on how we could overcome it. All I can see is the demolition taking place, after we had gone to court.

“They were served with the court processes on Thursday and the case was fixed for August 20 (yesterday). But before today, we saw that they had carried out what they said they were coming to do.

“On Saturday, my wife was with the governor of Oyo State. She was on her knees for almost five hours with the governor – it was around 11 p.m till 4a.m – in the governor’s house. I was on my hospital bed because I had been down since Tuesday that I got the demolition notice.

“I would have followed them to the governor’s house, but I couldn’t go because I was on the hospital bed. So, I asked my wife to go there and solicit on my behalf. My wife was with the governor for almost five hours.

“The governor said she should not worry, that everything would be resolved. As a matter of fact, the governor gave my wife $1,000 and two other people who followed her to the place. He told them everything was over. What we saw was the demolition on Sunday morning.

“I don’t know precisely what went wrong. What has been my offence to deserve this? I have close to 200 people who work with me here. All my labour, what I have laboured for, for over 20 years in pain, was just pulled down in minutes.

“So, I don’t know if there has been any way that I have wronged the government, I would have gone to beg or pray for forgiveness.”

Ayefele said he acted promptly on the letters he received from the government, adding that before the demolition notice was served on him, he had asked for a way out.

According to him, the government said he should put up another plan for approval, “which I told my architect to do”.

“It is not a day’s job. It was almost done when we get this demolition notice.

“As it stands, we are going to abide by the ruling of the court. Aside this, we are also suing the government for unlawful destruction of our property. We have relocated our studio and Fresh FM is fully back on air. It is only NBC that can stop us from broadcasting. They can only try but they can’t succeed.”

Ayefele said he got government approval for Music House, saying:

“In the approved plan of the Music House, we requested for an approval for a business complex with proposed two studios, which was approved. This building is more than 10 years. Are you now saying that the radio licence, which costs several millions to obtain, is not a business venture?